Change is a universal constant. Resisting that change is also human nature but as futile as trying to stop the Earth rotating. Over the past few months it has become clear to me that the Baby Boomers have finally gone bust. The generation born after World War 2 was the foundation for much of the societal and cultural change from the 1960’s onward. They were so big they ruled everything. Their buying power was greater than anyone. Television ratings were tailored to 18-34 to capture their viewing habits. When it came to fragrance they were also the perfume buying generation. They changed the notion of men buying perfume for a woman as a gift to the working woman buying it for herself. For fifty years the world was theirs; and now it is not.

Over the last nine months I have been bombarded with fragrance press releases all touting their ability to cater to Millennials. This is the generation which spans the early 1980’s through the early 2000’s. This is a generation just coming into the height of their buying power. This is also the generation which will set the table for the next couple of decades at least. In 2015 they outspent Baby Boomers in the prestige beauty market according to The NPD Group. Furthermore, their spending in this sector is mostly on fragrance where the aging Baby Boomers have spent more money on skin products and makeup. The times they are a-changing.

If the brands who have been observing this same data for a lot longer have made one decision about the fragrance preference of the Millennials. They want something light and transparent. Not necessarily fresh and clean. The preponderance of these early targeted perfumes has tilted more towards sweet gourmand constructs. Which if this is what Millennials crave I can get behind. At least it isn’t an overplayed genre. 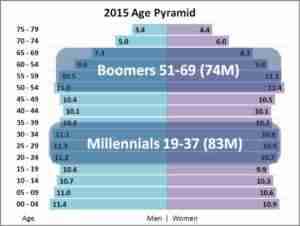 The most interesting press release I have received about a perfume aimed at this younger generation came from Chanel a couple weeks ago. It touted the Fall launch of a new version of No. 5 composed by in-house perfumer Olivier Polge called No. 5 L’Eau. In the press release the first paragraph speaks on how No. 5 is an “olfactory heritage” passed from “generation to generation”.

By the end of the first section it then makes the case that a new No. 5 is needed for this generation. Then it dives into what M. Polge is going to do. Change the metallic aldehydes out for citric ones. “Remove the powder from the base”. “Making the jasmine light as air.” In the next section No. 5 L’Eau is described as lighthearted and transparent. It was right then that it hit me. This generation sees No. 5 as an “old lady” perfume.

One of the most withering criticisms leveled at any fragrance is that it smells like an “old lady”. Which means outdated. Maybe too strong. Maybe also stinky and dense with extroverted components. Any fragrance given this sobriquet by a consumer is not going to be found on that person’s dressing table. Reading between the lines of the Chanel No. 5 L’Eau press release and all of the recent press releases from the brands catering to the Millennials I realized the Baby Boomer generation have become the new old ladies to them. The things we like are seen as outdated and quaint but not to be assimilated. No way.

It is paving the way for a very interesting next few years in the fragrance industry as the Millennials communicate what it is they do want through their buying power. For those of us being left behind we are going to have to turn to our independent perfume community to make some new “old lady” perfumes because while I might be one of the new “old ladies” I still want to smell like a Boomer.

2 thoughts on “We Are the New Old Ladies”