If there is one perfume I own which gets the greatest workout in the summer it is Thierry Mugler Cologne. This is one of two or three perfumes which I wear on the most sweltering of days. It is one of the most refreshing perfumes I wear which is why it works so well in the heat.

Thierry Mugler Cologne was the fourth fragrance released by Thierry Mugler. The first three Angel, A*Men, and Innocent could not reliably be described as refreshing. These were perfumes with presence. In 2001 it was very different than its stablemates in the Thierry Mugler collection. It is so different that I think it often gets overlooked. I am guilty of that as I’ve rarely written about Thierry Mugler Cologne as much as I have the other perfumes from the brand. One reason is when I have written about it I have referred to it as the perfume equivalent of your favorite t-shirt and broken-in jeans. There are few fragrances which wear so effortlessly. 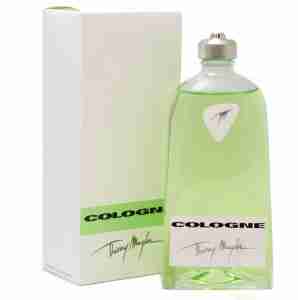 Perfumer Alberto Morillas was in the middle of his use of white musks in the base of numerous perfumes. By the time he got to Thierry Mugler Cologne he had truly become the master of the white musks. What he imposed over the top of the musks in the base was citrus and what he describes as a “sap” accord. It is that accord which makes Thierry Mugler Cologne the outstanding perfume that it is.

Thierry Mugler Cologne opens on a sort of soap-like feel. The perfume was inspired by a soap M. Mugler remembered from his youth. Petitgrain and orange blossom combine to make it feel like a homemade citrus soap. This is fresh without being boring. The heart note was listed only as “S” when the perfume was released. In later years M. Morillas identified it as a green sap accord. It has a funny quality about it as there are bits and pieces of familiar green notes like vetiver, clary sage, and galbanum. The trick is I don’t think any of those notes are actually present. There are just times I think they might be there and when I focus in looking for them I get lost in the green. It is one reason that this perfume has fascinated me for over ten years now because I think I make it whatever my mood wants it to be. It finishes on a mixture of white musks. By this time M. Morillas could make these ingredients dance to his tune. Here they are those broken in denim jeans just after being ironed.

Thierry Mugler Cologne has 10-12 hour longevity although this is deceptive because you might not detect it after 8 or so hours but other will still smell it on you. It has average sillage.