The ranks of discontinued perfumes are full of examples of fragrances released at the wrong time. I am often lamenting that if that particular scent was released today it would be a big seller. It is rare but some of those early out-of-step perfumes have managed to survive until the trends caught up with them. Because they have been around so long it is no surprise that they have fallen off most people’s radar screens. This month I’m going to try and put Paloma Picasso Minotaure back into play. 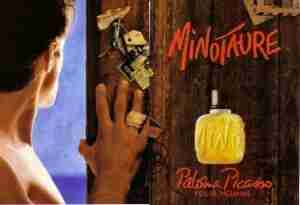 Paloma Picasso was the daughter of famed modern artist Pablo Picasso. In 1984 she released her first perfume called Mon Perfume. It was a very classical chypre done very well and it sold pretty well. Eight years later Ms. Picasso would follow-up with a masculine fragrance called Minotaure. She worked with perfumer Michel Almairac to create a wonderfully complex perfume which struggled to find an audience in 1992. It would go out of production for a time but it has been placed back on the shelves as of 2012.

Where Mon Parfum nodded to a classical composition Minotaure was doing anything but playing it safe. M. Almairac used a very green geranium as the core which he surrounded in bright citrus, vibrant herbs, woods, and leather. Today this kind of structure is not unusual if not necessarily common. In 1992 this was not on trend.

Minotaure opens with a big bright flare of citrus to which lavender is added. This was a common opening but M. Almairac added what he called a “marine accord” trying to nod to the beginning of the aquatic trend. This set of ozonic and salt spray notes makes it feel like you are standing on a cliff overlooking the ocean with fields of lavender and citrus at your back. Tarragon, sage, and rosemary provide a strongly herbal transition into the heart. M. Almairac takes geranium and uses it in a concentration not usually found, as this time it is the star instead of providing support and depth. It makes it the perfect pairing with the herbs as at this concentration the green qualities of geranium are amplified. This all gives way to a lovely leather accord and sandalwood in the base.

Minotaure has 10-12 hour longevity and above average sillage. It is a 1990’s powerhouse go easy when applying.

M. Almairac produced a perfume twenty years ahead of its time. If Minotaure had been released in 2012 I think it would have been talked about and lauded. Just because it is from 1992 doesn’t mean it’s not relevant in 2015. It means its time has finally come.

4 thoughts on “Under The Radar: Paloma Picasso Minotaure- The Right Time has Arrived”