One of the fun things about the gathering of perfume lovers that the internet spawned was when lemmings were spawned. The typical life cycle for this was for someone to stumble over a press release describing a perfume to come which sounded amazing. The next stage was a general amplification of desire as it was imagined what it would smell like. Then the first people would get the chance to try it. If they came back and reported it was as good, or better, the stampede was initiated, and we rushed headlong to the cliff…um…I mean the store. The final stage was a kind of post-coital languor as we all talked about how good it was. In 2008 one of the largest lemmings ever born was Comme des Garcons x Monocle Scent One: Hinoki. 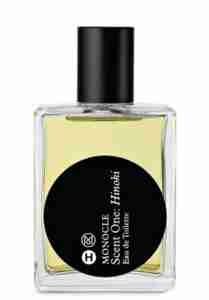 Comme des Garcons had serious perfumista cred in 2008 as creative director Christian Astuguevieille had defined what it meant to be a niche fragrance. Merging that aesthetic with a non-fragrance brand was another interesting step. Monocle was a lifestyle magazine founded by Tyler Brule in 2007, Besides lifestyle there were also international affairs stories in between the sleek furniture and cutting-edge fashion. The sensibilities seemed like a good match. 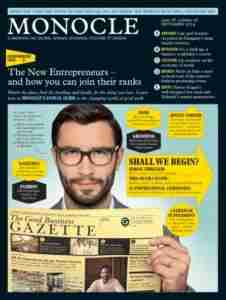 Towards the end of 2007 it was announced that the first perfume from this collaboration was going to be called Scent One: Hinoki. Perfumer Antoine Maisondieu was going to bring the juice to life. Scent One: Hinoki was meant to evoke a soak in a hinoki wood tub amidst a pine forest in Japan. What was great about this perfume when we were in the imagining what it would smell like phase of the lemming cycle was the inclusion of this top note, turpentine. Turpentine? You mean mineral spirits? Lots of debate on whether that was going to be good or not. It, plus another challenging note, would become the acid test on whether it was worth the chase.

That other note is camphor and along with the turpentine that is what you get at the start. It is challenging in a nose wrinkling kind of way. When I first tried it on a paper strip it put me off in a big way. When I finally put some on my skin it was completely different as the challenging aspects became more diffused on my skin. Then the camphor and turpentine turn into a raw wood accord. If you’ve ever worked with green wood this is the smell of that. As that fades a more finished wood appears; cypress and pine are the choices. Green is introduced via vetiver, thyme, and moss adding back some of the rawer character lost with the more refined woods ascension. In the base the incense burning just outside the tub swirls over it all.

Scent One: Hinoki has 6-8 hour longevity and average sillage.

During 2008 I was tracking what the most reported scents in the Scent of the Day thread in the forum were. On the men’s forum Scent One: Hinoki was one of the top 5 for the year. The really final stage of a lemming is it is forgotten as the crowd chases the next one. Scent One: Hinoki is good enough it shouldn’t be forgotten or found Under the Radar.