When perfume nerds get to talking about the most influential brand of the niche age of perfume; I have a very strong opinion. My choice is Comme des Garcons. From its beginnings in 1993 it would help define and refine what a niche aesthetic was in fragrance. It has been overseen by one incredible creative director in Christian Astuguevieille for the entire time. That longevity and consistency should not be taken for granted. Many of the early niche pioneers have lost their way. It seemed like it was part of the natural process. Keeping a high level of creativity was just not something that should be sustainable. Especially as we entered the second decade of the 2000’s it was happening with frustrating regularity. Comme des Garcons had seemingly fallen prey to the same issue with a streak of one mediocre release after another in 2012. I was thinking this was the final exclamation point on the first age of niche perfumery. Then M. Astuguevieille showed me in 2013 that the previous year was just an anomaly. Comme des Garcons bounced back with a new set of perfumes which recalibrated their aesthetic to be relevant for the now. At the center of these releases was Comme des Garcons Blue Santal. 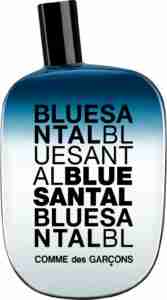 One of the things which Comme des Garcons has done well is to have releases for the wider mass-market next to the more exclusive releases. Blue Santal was one of a trio of the former released in the summer of 2013. The other two Blue Cedrat and Blue Encens have been discontinued leaving Blue Santal as the only reminder of the sub-collection.

Perfumer Antoine Maisondieu would compose a perfume which creates a push and pull between the green of pine and the dry woodiness of sandalwood. It is the kind of perfume I wear on a warm day because of that vacillation between cool pine and warm sandalwood.

Blue Santal opens with the terpenic tonic of that cool pine. M. Maisondieu adds in the sharp gin-like acidity of juniper berries as the bridging note. The base is one of the early uses of the sustainable Australian sandalwood. It is one of the first fragrances to accentuate the drier character of this newer source of sandalwood. It still carries the sweetness with the creamier character less prominent. It presents the right counterweight to the pine. Then over the hours it lasts on my skin it is like a set of scales with the pine on one side and the sandalwood on the other pivoting on a fulcrum of juniper berries.

You might think it unusual to choose a release from such a well-known brand as Comme des Garcons as an Under the Radar choice. From a brand pushing towards a collection of one hundred releases I think it is easy for even the best ones to fall off the radar screen. I thought it was time to put Blue Santal back on it.