The first stage of my perfume journey took place in the 1980’s and 1990’s and it was pretty much a solitary affair. When the Internet happened I would dive into the online community for a communal experience. One of the problems was information overload. Reading posts from people describing fragrances which I had to try caused me to really become acquisitive. I am sure if I had tracked my purchases the early 2000’s would have been when I bought the most. Which would coincide with finding the vast online community of other perfume lovers. Over time I would discover those who posted who shared my taste. As funny as it sounds in those days the thought of sharing my thoughts on perfume was frightening to me. I was a few years away from thinking I had anything to add to the conversation. So my benefactors had no clue they were enabling me. I was also early in my days of trying to understand the raw materials that went into perfume.

One morning I opened up one of the perfume forums and there was one of my scent twins talking about this perfume with a kelp note and a new wood I had never heard of, rosewood. The perfume was called Carthusia Uomo and I was off to find a bottle. 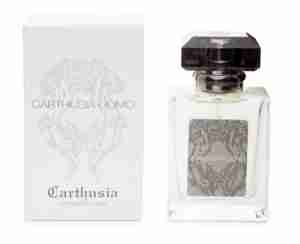 Carthusia is a heritage Italian brand. It was revived in 2000 with a mix of legacy and new compositions. It was 2004 until Carthusia Uomo would make its appearance. Uomo was one of the original Carthusia releases back in 1948. The four legacy releases carry a classic aesthetic to them. Uomo is the one which has some semblance of a contemporary air to it because of a couple of unique raw materials used in it. The perfumer who worked on these early releases has been lost to time. Laura Tonatto oversaw the early new releases and I suspect she also did the same for the legacy re-issues. I have never been able to source any of the vintage Uomo so I also have no idea how close or not this is to the original. What is here is one of my favorite warm weather perfumes.

Uomo opens with a very familiar Mediterranean accord of green tinged citrus. That all changes rather rapidly as the heart accord consists of notes like raspberry, patchouli, jasmine, and kelp. Here is what makes Uomo stand out for me. Those four notes could be combined to form something very heavy. In Uomo the opposite happens as it is kept very breezy and light. The raspberry is not the cloying ingredient from too many to count fruity florals. The jasmine is ethereal. The patchouli is the magic carpet for all of this to ride upon. Then there is the kelp which imparts a briny green aspect. It is like a stiff breeze off an ocean with the kelp floating on top. The same light hand extends in to the base accord as a trio of woods; cedar, sandalwood, and rosewood combine. The cedar provides a clean frame; the sandalwood the platform, for the slightly sweet rosewood to steal the show. It arises seamlessly from the opaque raspberry to form a fabulously sweet woody finish.

Uomo has become more widely available than it was when I first heard about it. I can recommend giving the Carthusia brand a try if you do go in search of Uomo as the whole brand is under the radar. But the brightest light in that collection is Uomo.