Sixteen weeks ago on the eve of the premiere of Twin Peaks: The Return in this column I said “it’s been twenty-five years; tell me a story”. Well after the 18-hours of this I have been told a story that has been more than I could’ve expected. I have been given so much story, along with spectacular visuals, I suspect it will take another twenty-five years for me to digest it all.

Back in 1990 when Twin Peaks premiered on ABC it was so unexpected for a broadcast network to show something like that. In 2017, with the niche television landscape Showtime could commit to 18-hours. This allowed creators David Lynch and Mark Frost to fully realize their visions. Mr. Lynch would direct every episode. It resulted in one of the greatest collection of a particular visualist’s aesthetic since Rainer Werner Fassbinder’s “Berlin Alexanderplatz”. For a director to be given the opportunity to make an extended version of a movie over a number of segments must be a gift. Mr. Lynch took this largesse and displayed everything I admire about him. If you’ve been a long-time viewer of Mr. Lynch’s style every bit of it was here to one degree or another. 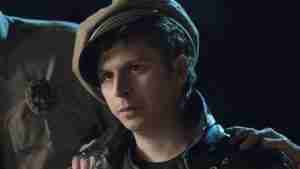 There were long pauses between dialogue verging on and passing uncomfortable. Commentary on how we are so used to word salad when it comes in haute cuisine we’re not sure what to do with it. There were moments of sweaty palmed tension released in a horrific climax. To the point that other moments ratcheted up tension that didn’t get released. The sound editing also done by Mr. Lynch carried by crackling electricity throughout was all about the energy running through the story. There were moments of wry commentary on our current way of life epitomized by Michael Cera who plays the son of Deputy Andy and Receptionist Lucy; Wally Brando. Mr. Cera gives a comedic performance where he channels the cadence of Marlon Brando as he comes to pay respect to his godfather, the local sheriff, in the dialogue of Luca Brazzi. It is four minutes of writing and performance gold. 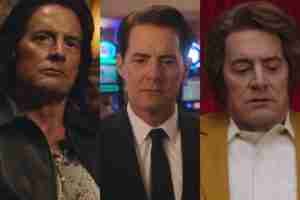 The Three Faces of Kyle MacLachlan in Twin Peaks: The Return

Another component of all of this is the David Lynch Repertory Company was represented throughout. Many of the actors he has worked with in his movies joined original cast members. There are so many good acting performances I am only going to focus on one; that of Kyle MacLachlan. Mr. MacLachlan had to be the glue that held all of this together as he played three versions of characters who looked like him. He gave each of them distinct personality so just the way he delivered the line you could tell which character it was. Through his performance Mr. MacLachlan portrayed almost every imaginable human emotion through the entire series. I know Twin Peaks: The Return is going to be odd but if Mr. MacLachlan is not in the Best Actor Emmy race for a Limited Series then the Academy is full of idiots. 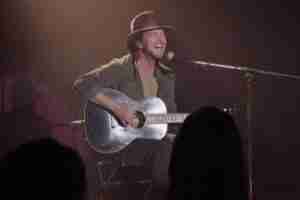 Edward Louis Severson III a.k.a. Eddie Vedder at The Roadhouse

The final part of what made Twin Peaks: The Return a joy for me was almost every episode ended with a musical performance in The Roadhouse. Some of my favorites like Chromatics, “the” Nine Inch Nails, The Cactus Blossoms and Lissie were already on my playlist. I added new bands Au Revoir Simone, Sharon van Etten, and The Veils. Just from a musical perspective it was a feast. The one single performance which made the top of my list over the entire series was Edward Louis Severson III’s “Out of Sand”. You might know the singer better by his stage name Eddie Vedder and this song was a perfect capstone to one of the pivotal episodes. Giving these musicians the opportunity to enter the Twin Peaks playground was another brilliant decision.

I know I have a lot of readers who were frustrated by everything; I got a lot of e-mail about it. I know Episode 8 was the break point for many. That episode was done in the most surreal way where I think Mr. Lynch was equating the A-bomb was responsible for the release of evil in to the world. I’ve watched the episode six times now and It is jam packed with so many visual beats I am still seeing new things. I think everyone who returned for episode 9 was like me completely captured. There was almost the idea of Mr. Lynch laying down this barrier of if you can’t deal with this I still have ten more hours for you.

My opinion is Twin Peaks: The Return has incredibly duplicated what Twin Peaks did. It re-invented what you can aspire to on television. If it spawns half of what the original did it will be fabulous.