I spent too much time over the Holidays binge watching various things. Because I was on Netflix, a lot, I kept getting recommendations for this new series “The Witcher”. I was familiar with the characters because I played the video game of the same name a few years ago. I kind of knew it was based on books, but I never sought them out. I finally gave into the Netflix nudging and started watching. Only one episode. Which turned into watching all eight. It was like eating epic fantasy junk food. I couldn’t stop until the bowl was empty. 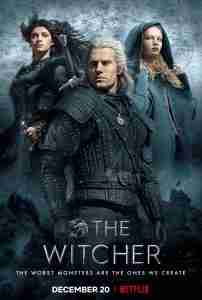 The Witcher is that kind of fantasy which verges on bring bad but knows how to wink at you to know its not trying to be great. It reminds me of the syndicated series of “Hercules” and “Xena, Warrior Princess”. Or if you need a deeper cut the Arnold Schwarzenegger “Conan the Barbarian” films. None of these take their material so seriously while keeping it fun. That is what “The Witcher” does.

The titular hero is Geralt of Rivia played by Henry Cavill. Geralt travels around as a bounty hunter of mystical creatures who threaten villages and kingdoms. He gets paid by the townsfolk to kill the offending beast. He is a “mutant” which makes him not part of the society of anyplace, so he is cursed to move around.

The stories in the books also revolve around two other characters sorceress Yennefer of Vengerberg and Princess Ciri of Cintra. The clever trick the writers use is we see each character in their earliest days in the early episodes. It is only about halfway through we realize we are watching three separate timelines from many different decades. The entire first season is towards bringing all three of these characters to the same place at the same time.

This kind of storytelling allows for time jumps which have fun payoffs. The one which is funniest is when Geralt picks up a bard, Jaskier, who follows him. By the end of the episode Jaskier has written a song about Geralt, “Toss a Coin to your Witcher”. When they meet again ten years later the song has helped create a mythology around Geralt. The choice of three timelines moving in parallel makes for a new way to tell an origin story.

As I mentioned there is a video game based on this world. It was amusing to see each fight scene as a level in the video game as they tend to have that quality to them.

If you need some goofy fantasy fun queue up “The Witcher”. One warning you will be singing “Toss a Coin to your Witcher” once you hear it.