I never had a dog when I was a kid. I can’t say I thought it was something I missed. Then Mrs. C and I adopted a brown standard poodle named Jojo. We got Jojo from Poodle Recue of New England. As it is with most all rescue dogs they have not had an ideal life. Jojo’s story was he was part of a puppy mill and when not being asked to mate he was kept outside in a cage. He was rescued when he was nine. He was a mess and the rescue organization cleaned him up. Jojo was a gentleman with an emphasis on the gentle. His previous existence had made him very reserved but occasionally I could get him to play with me. One morning he decided he had had enough of me and stood up and barked in my face. Then heartbreakingly he pulled his snout away to the side anticipating a smack. With tears in my eyes I hugged him and said “good boy”. Over time he learned that barking was okay. He would need it. 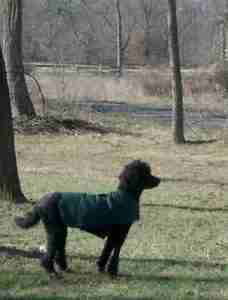 Georgie in the yard in Poodlesville

Two years after we got Jojo we realized we wanted to get him some younger company so we contacted Poodle Rescue. They had rescued a litter of four poodle puppies from a would-be breeder who was going to abandon them. Jojo was a favorite within the rescue group and they wanted his life to be easy so they asked us if we would take in one of the puppies who looked to have hip problems. We had no problem with that. Watching young Georgie not be able to go up the stairs in our house was awful. We were ready to figure out how to make it easier for him when a funny thing happened. Regular feeding of good food and the hip problems went away revealing a frolicking puppy underneath. One for whom Jojo would need his newly-found bark. Almost every night Georgie would wait until Jojo curled up on his bed and closed his eyes. At that moment, he would cross the room and pounce on him. Jojo would get up and let him know he was not amused. When I would come home from work I would always say I was greeted with the 21-bark salute. 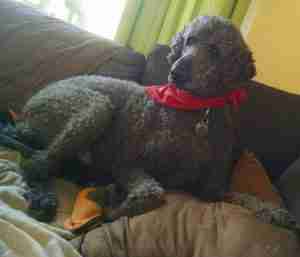 When Jojo passed away we realized we needed a new companion for Georgie who was acting sad at being an only poodle. After a short adoption of Gunner who had a genetic disease we eventually received Rocco from the rescue organization. From the moment, we got him Rocco had already learned that charm got you attention. Whenever anyone came near he would sit and lift a paw. The list of admirers was legion. The many treats he received numerous. I called Rocco a Moochasaurus because almost nobody could resist giving him a treat. Rocco and Georgie were best friends who when we moved to Maryland and the size of the yard increased immensely were as happy as could be. The town we moved to is called Poolesville but we have renamed our part of it Poodlesville.

When Georgie passed on Henry arrived. Henry had been struck so hard by his first owner that his right eye was ruptured and he lost vision in it. The next owner passed away from a stroke and they found Henry curled up next to her when they discovered her. Henry is the sweetest tempered poodle we have had, unless you’re a squirrel. When Rocco passed, we waited a year before adding our latest rescue, Jackson. Jackson came courtesy of negligent breeders again. He was not allowed to socialize with other dogs or people which made him very skittish. Over the three months we have had him in Poodlesville it has been interesting watching him realize Henry, Mrs. C and I are his pack. Every day the fear and nervousness get a little less.

Next to asking Mrs. C in to my life the Wild Poodles of Poodlesville have given me the most pleasure.