What if Taylor Swift, Beyonce, and Katy Perry were immortal gods who would burn out in two years? That is the center of the story being told in the comic series The Wicked + The Divine created by Kieron Gillen and Jamie McKelvie. It is a story of power, of all kinds. At its most interesting it waonders at the hold of pop music It is never less than fascinating. 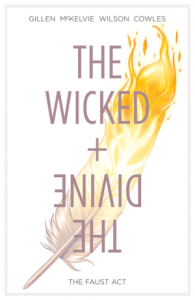 The story begins with our heroine Laura attending a performance by Ameratsu. Ameratsu is one of the twelve members of The Pantheon. Each member of which is a normal human who has merged with a powerful deity. The bodies have a finite ability to contain the power but for a short time they are all-powerful. The things which makes this stand out is they are also pop music superstars. A different kind of fleeting immortality.

Laura at the concert is invited to meet the rest of The Pantheon. As she is slowly drawn in by her guide, Lucifer, we start to wonder if Laura is destined to be a member. The first five issues of the series are that story. The connection between fans worshiping musicians or are they worshiping the gods is blurred quite cleverly. 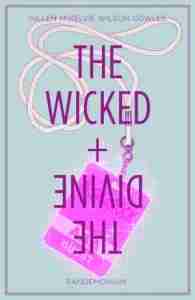 The next six issues are the story of whether Laura will rise to become the twelfth member of The Pantheon. This is about Laura’s desire to attain godhead and whether she does. As with the first arc the creators draw a number of parallels between pop music stardom and whether that is a form of divinity. 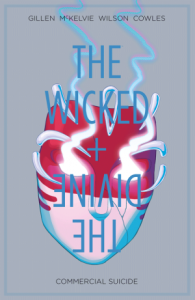 The next arc of six issues will be released next week. I have been reading this series as each volume of collected issues comes out. My version of binge watching a comic book. With this series I think I would have been very frustrated if I was following month by month. It is a slow build up to the final climaxes in both of the first two arcs. It reminds me of television shows like “Game of Thrones” where all of the threads snap together at the end. If you want to read it month by month Issue #18 is due in April of 2016 so you have some time to catch up.

The Wicked + The Divine has quickly become one of the best ongoing comic series on the market. Much like the similarly praised Saga by Brian K Vaughn they are doing groups of issues as arcs with a little break in between. I like this because I think it keeps the creative team fresh and also gives them some flexibility to produce the best story they can. The results are there on the page to be seen.

The best part of it all is I watch the current generation of pop stars with a different perspective.