Ever since the success of The X-Men there has been a place for angst filled superheroes. There is an appeal in watching characters who aren’t heroic but who just want to get through the day. The latest iteration of this is the Netflix series The Umbrella Academy. 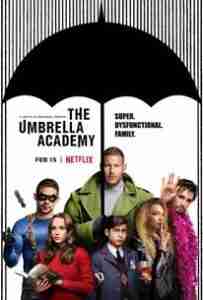 The series is based on the comic book series by Gerard Way and Gabriel Ba. It just released its second season at the end of last month. The premise is on October 1, 1989 43 women gave birth without having been pregnant until they began the birth. A billionaire, Sir Reginald Hargreeves, adopts seven of them. He realizes there is something special about them. He learns they have superpowers and trains them to be a force for good known as The Umbrella Academy. As teenagers they are a part of pop culture until something happens to cause them to separate. When Season 1 begins they are drawn back to the mansion they grew up in for Sir Hargreeves funeral. While there they learn they are responsible for a future event which will end the world.

The entire first season is all about learning the backstory of the characters as they try to avert the coming disaster. The story strikes a balance between the interpersonal and the heroics. As adults each member carries the effects of an upbringing from a man who saw them as a tool for good rather than the children they were. Those psychological scars lead to an explosive climax.

The second season picks up after that, where the members of The Umbrella Academy have been scattered through years in the early 1960’s in Dallas Texas. Each of them finds their own way to cope with their new circumstances until they all find their way back to each other in November of 1963 just prior to JFK’s tragic trip. This time left on their own each of them finds a measure of happiness in their respective time in 1960’s America. To avert disaster they must give up something that was missing from their previous life.

The show is marvelously cast with an ensemble cast which shines in their respective roles. There really isn’t a single stand out as they are all excellent. Even though I have described a serious plot above there is a lot of fun in between. The writers have a particularly good time having our 2019 heroes assimilate in the 1960’s. The early moments of each of them and how they make their way in the past are a lot of fun.

The Umbrella Academy is the kind of superhero fun that feels exactly right these days.

One thought on “The Sunday Magazine: The Umbrella Academy”