Like many other Americans sometime in the late afternoon I will sit down in front of my television set and watch Super Bowl XLIX between the Seattle Seahawks and the New England Patriots. I have been fortunate to attend every major professional team championship at least once. My one and only Super Bowl was in 1976. 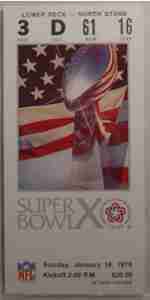 In 1976 I was finishing my junior year of high school and was working as a doorman in a condominium which catered to what were colloquially called snowbirds. These were a mostly older clientele who lived in the Northeast for most of the year but spent their winters in Florida. My job was to park cars and help them with packages and odd chores. The condo was close to one of the major resorts of South Florida called The Diplomat. It happened to be the official hotel of one of the teams in Super Bowl X, The Pittsburgh Steelers; who were playing the Dallas Cowboys. As I was sitting outside and saw some fans wearing Steeler jerseys walk by I yelled out, “Kick their ass!” They came up to talk with me and I gave them a little information about places around the Orange Bowl, the site of the game. They thanked me and headed off. About an hour later one of the men in the party walked up and asked me if I was off work in time for the game. I replied I should make it home just in time for kickoff. He smiled at me and asked me if I wanted to see it live. He held up a ticket and said if I can make it he’ll sell it to me. I said sure and I handed over the price of the ticket, $20. The “cheap seats” for this year’s version go for $500. 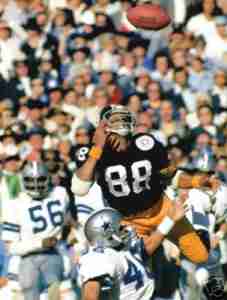 I got off work and because I knew the side roads and places to park I rushed into the stadium and I got to my seat just as the Steelers kicked off to the Cowboys. That return would set the stage for a back and forth game as the Cowboys tried a bit of trickery with the return which set them up at midfield. In a tight game of back and forth I saw one of the most impressive big game performances by Steeler receiver Lynn Swann who made one of the great catches of a pass in a Super Bowl as he dove and tipped the ball back to himself twice before making the catch and hitting the ground. I was hugging and cheering with my new-found friends from Pittsburgh. They would go home happy as Pittsburgh would win 21-17.

This is the biggest difference between being there and watching it on television. Tomorrow I will be amused at the commercials. I’ll have a better view than anyone at the game. My chair will be more comfortable. I would trade it all for a seat in the last row. To be at a championship event surrounded by the fans of the participants where it is winner take all is best appreciated live. The joy and the despair are amplified as every play is important. For all of the Seahawks and Patriots fans who will be spending a fraught day until a winner is named- enjoy it whether in your living room or from the last row in the stadium.