In just a few days I will continue a tradition I started forty years ago….in a galaxy far, far away. I have been at the first local showing of every Star Wars movie since the first one in May of 1977. On December 14th I have my ticket for the newest; Star Wars: The Last Jedi. Like many, Star Wars has been a big influence on my personal perspective. I’ll write about the new movie sometime after the New Year and after most have had the opportunity to see it. For now, this is the time of year when I write about Holiday-themed things at The Sunday Magazine. You might not know that there is something called The Star Wars Holiday Special. There is, and it was such a disaster that it only aired once and has never been released on any of the DVD extras in any Star Wars set. That’s how bad it was. It is an example of how so many people didn’t know what to do with Star Wars as it met The Carol Burnett Show and produced a misfit toy. 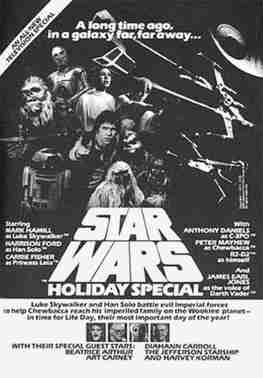 No one had seen anything like the phenomenon Star Wars had become which then became a line of people approaching creator George Lucas about what they’d like to partner with him on. I’m not sure why in mid-1978 when he was approached by CBS on doing a Holiday special it was agreed to. The studio told him it would promote the movie and the toys. With no blueprint to follow the green light was given. Then things took the first of many wrong turns.

They hired writers Pat Proft and Leonard Ripps, veterans of TV variety shows. Upon meeting with Mr. Lucas he gave them the idea of a holiday called Life Day and setting the special on the Wookie home planet of Kashykk with Chewbacca trying to get through the Imperial blockade to be home with his family. Which is the skeletal story frame of what the Holiday Special would become. 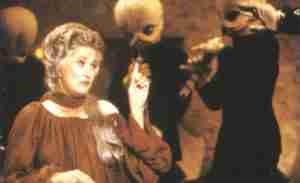 The problem was CBS wanted a traditional assortment of stars to be added into the mix as you would find on any variety special. Which meant Art Carney, Diahann Carroll, The Jefferson Starship, Harvey Korman, and Bea Arthur. Each of these were central to typical sketch comedy acts within the show with Mr. Korman playing three different roles as he was accustomed to doing on his regular gig on The Carol Burnett Show. The writing team was supplemented by vets from that show to help “punch up” the comedy material. According to one story there was a moment when Mikhail Baryshnikov and Ann-Margaret were considered. I can only imagine what the segments featuring them would have been.

The Jefferson Starship as The Holographic Band

After a chaotic shooting schedule where the movie’s stars didn’t want to be caught “slumming” on television while the television stars didn’t understand a thing about the universe and story they were inhabiting. It all ended up being aired a week before Thanksgiving in 1978 on November 17.

That was the last time it officially appeared.

It was criticized on all sides. What was being thought of as a new Holiday perennial before it aired was quickly buried; but not forgotten. It has become that bit of Star Wars which gets shared on the down low among fans; usually with a knowing grimace. There is a ten-minute animated short within the special which introduces bounty hunter Boba Fett into the greater story. That was the only thing that felt like Star Wars on the night it aired. Everything else from Ms. Arthur singing to the aliens in the cantina to Mr. Korman’s slapstick antics just felt wrong.

If you want to see just how bad it is I include a YouTube link here.

My favorite piece of the bad parts is when the wookie family attempts to distract some stromtroopers with the musical stylings of The Jefferson Starship as The Holographic Band.

There is a reason this is lost to time even Mr. Lucas has said if he had the time he’d track down every copy and smash it with a sledgehammer. Even so I can’t completely hate it, but it is terrible. I watch it almost every Holiday season on my bootleg DVD.