I had something all ready to go for this column and then I woke up to Facebook this morning and this post: “It was five years ago tonight that the single greatest episode of television aired.” As soon as I read it I knew exactly what he was talking about; although I checked IMDB to be sure.

Five years ago, I was sitting down to the penultimate episode of the final season of Breaking Bad called “Ozymandias”. There is no single episode of the series I remember more clearly. The show would end its run a week later but it is this episode which stands out.

One reason it stands out is it ties off several plot strands instead of leaving them to what would have been an overstuffed final episode. From its beginning Breaking Bad was the story of a man doing bad things for a good reason. The entire series is a testament to the old axiom about the path to hell being paved with good intentions. As we near the end Walter White has become a morally bankrupt character. His action, or inaction, has caused the death of many. In “Ozymandias” two of those come home to roost. One was watching a character die while doing nothing. This plot strand was two years in the making to hit this payoff. When Walt reveals his indifference to his longtime partner in crime, Jesse, it is the height of cruelty. The episode opens with a reminder of Walt and Jesse in happier(?) days when they first started cooking meth. By the time it circles around to current events it captures the line from the poem which gives the episode the title, “Look on my Works, ye mighty, and despair!” 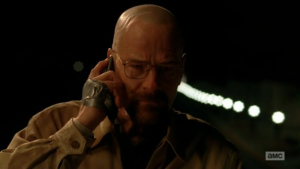 The final three lines of the poem are “Nothing beside remains. Round the decay/ Of that colossal wreck, boundless and bare/ The lone and level sands stretch far away.” Those describe the final act of the episode as it revolves around a final phone call from Walt back to his wife Skyler. The acting was always of the highest caliber in Breaking Bad, but this single exchange might be its best. Bryan Cranston who plays Walt and Anna Gunn playing Skyler payoff four seasons worth of story in four minutes. 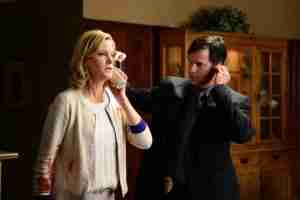 Walt calls Skyler knowing the DEA will have tapped his phone. He wants to take this opportunity to exonerate her in the eyes of the authorities. When Skyler begins to talk with him she begs him to turn himself in. Walt cruelly castigates her for her lack of support. It seems like he is compounding the cruelty shown Jesse earlier in the episode. But he isn’t. We know this because Ms. Gunn shows the audience with a narrowing of her eyes what is happening. As Walt continues to spout hateful things we cut to his face as he chokes back sobs. Again, the facial acting of Mr. Cranston is incredible as that is where you see the true emotion; not in the words. Those words though will exonerate Skyler and keep her from being dragged down by Walt’s acts. As the conversation ends with Walt’s words, “I still got things to do.” It is like a gut punch of emotion.

One other piece of this scene is the direction by Rian Johnson. As the phone call takes place he moves the camera from shadow to light and one profile to the other to visually cue the double-sided nature of the conversation. It provides the actors the opportunity to switch masks as the scene progresses. Mr. Johnson would use his work on Breaking Bad to find himself directing a little movie called Star Wars: The Last Jedi a couple years later. If you watch that movie you will notice some of the same kind of camerawork and staging from “Ozymandias” is also found in a galaxy far, far away.

I am far from being alone in my praise of this episode. It was what the series submitted to the Emmy committees the year it aired. Should be no surprise it won multiple awards including acting ones for Mr. Cranston and Ms. Gunn.