On April 8, 1990 I sat down in front of my television to watch the first episode of something claimed to be, “The Series That Will Change TV Forever”. With the discovery of the body of Laura Palmer that lofty goal would be lived up, and down, to over two years by Twin Peaks.

The question of “Who killed Laura Palmer?” would become a societal phenomenon while creators Mark Frost and David Lynch took us on a circuitous path to that answer. By the time, we got to the end of the first nine episodes we had become drawn into a new storytelling format for the small screen. It was unclear if Mr. Lynch’s cinematic style would work on something much smaller. Turns out the claustrophobia of the typical 19-inch television added to it. Working with Mr. Frost every step closer to answering the central question added more texture to the story. Every visual that could be tweaked for comedic or dramatic effect was. The music by Angelo Badalamente was its own character providing the ratcheting nature of tension within some of the key scenes. Those first nine episodes were something that was going to change TV except they forgot to tell us who the killer was leaving us hanging until many episodes into the second season to find out. The answer was worth the wait. 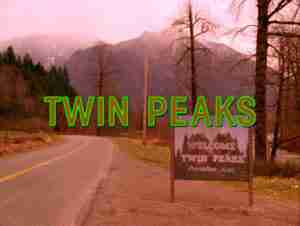 The problem was for this show was what was next? Over much of the rest of the second season Twin Peaks was weird and disturbing but without a central narrative it became more fractured in nature. It also suffered from Mr. Lynch not being as constant a presence. That lack would be confirmed as he came back for the final episodes. During the final episode, the spirit of Laura Palmer tells our hero “I’ll see you again in twenty-five years”. That was in June of 1991. In May of 2017 it turns out she will be off by a year as Twin Peaks makes its return on Showtime.

We were left on a pretty big cliffhanger which I suspect will be where this new run of episodes will begin. I sit here hours before finding out the answer but I think Mr. Lynch and Mr. Frost helped to create the television environment which will allow Twin Peaks to thrive in. The impact of the original two seasons showed those who approve new shows audiences would flock to, and stick with, something completely different. This allowed for the great run of television drama we are in right now. Almost to a man or woman the creative teams mention Twin Peaks as a source of inspiration.

The great thing for this new 18-episode season all of them were written by Mr. Lynch and Mr. Frost; with every episode directed by Mr. Lynch. Many of the original actors are returning to their roles while new characters are introduced. I’m not sure what to expect which is one of the reasons I can’t wait to find out. Okay Laura I’m here; it’s been twenty-five years, tell me a story.