I miss bookstores. When I got my first job I used to go to my local bookstore every Thursday when the new releases would arrive. I would read the description on the dust cover and decide if it was something I wanted to read. The bookseller would learn my tastes and would recommend something they thought I would like. I no longer have that weekly visit because the internet keeps me updated in real time. My authors are on a list and the moment their new book is released I get an alert. Which is great. What I miss is that chance of holding a book by an author I have never heard of. Eventually liking that debut effort so much they would be added to my list of writers I read. The other problem with that is I feel like I am out of touch with the best new authors.

This all came together at the end of the year and I was looking at the various Top 10 fiction lists. As I looked I realized that I now had barely read a third of the books that were being lauded. The main reason was 2016 seemed to be a year where first-time authors were really making a mark. As I looked at these books there was one which leapt to the top of my list; The Nix by Nathan Hill. 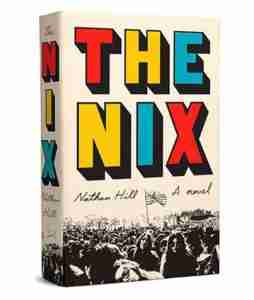 The Nix is the story of Samuel Anderson in 2011 an English professor who once published a novel which allowed him to have a moment but that moment had seemingly passed. That is until 2011 and the mother, Faye, who abandoned him becomes a media sensation for an act of civil disobedience. Asked to do a biography of her Samuel realizes it is his opportunity to even the score for her leaving him at 11 years old. The story leapfrogs from 1968 to 2011 making stops in between as Faye recounts her story to her son. It all comes together in a moment of elegant storytelling

Mr. Hill can follow an acerbically witty passage with one that touches depths of emotions. I would go from wiping away tears of laughter to doing the same with emotional versions a few pages later. The Nix is one of those disjointed narratives that can be frustratingly aloof to get in to. Mr. Hill’s prose especially early on doesn’t draw you in as effectively as it might. But once The Nix get to the heart of its story I found it hard to stop reading. This is a book where I urge you to get past page 200 before giving up. What happens in the last two thirds makes up for the too careful construction of the plotline.

If, like me, you miss finding new authors at the local bookstore let me be your guide this time. Mr. Hill looks to be a major new talent and The Nix shows why.

One thought on “The Sunday Magazine: The Nix by Nathan Hill”