This has been a solid week of opening my imaginary Marvel Advent calendar. Tuesday was the latest trailer for March’s “Captain Marvel” movie. Seeing her in all her badass mohawk goddess glory was awesome. Friday saw the release of the trailer for “Avengers: Endgame”. As Cap shed a tear for the loss of his friends I was shattered. The other thing I received this week was one of this year’s two Holiday comic books from Marvel, “The Merry X-Men Holiday Special”.

Every year the two big comic book companies DC and Marvel release Holiday special issues. Most of the time they are single one-shots with a silly shoe-horned intersection of holidays and Heroes (or Villains). Even so they can be memorable enough to rise above it all. One from DC was in the 1994 Batman Adventures Holiday Special #1. The story “The Harley and The Ivy” is about Harley Quinn and Poison Ivy drugging Bruce Wayne with poisoned lipstick which allowed them to force him to take them on a shopping spree for gifts. The art, by Ronnie Del Carmen, would portend the jump to the animated series three years later virtually unchanged.

You’ve probably seen ads for the movie “Once Upon a Deadpool” where the PG-13 cut of “Deadpool 2” gets a new framing device around the Holidays. In the 2008 Marvel Holiday Special Deadpool took on Santa Claus to change his rich client’s name from the Naughty to the Nice list. Santa catches him at it and they fight it out with an interruption from the Abominable Snowman. Santa eventually pays Deadpool a price which cannot be matched to turn the tables on his client. 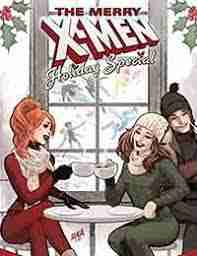 I think you can tell I usually enjoy these efforts. For this year’s “The Merry X-Men Holiday Special” I was interested for two reasons. One, was that it was laid out like an Advent calendar with each day represented by a one-page story written and drawn by different teams. The second reason was the return of the man who made the X-Men great, writer Chris Claremont. There were also some pages by celebrities which showed that they shouldn’t quit their day jobs. The exception to that was hip-hop artist Jean Grae who wrote a funny Jean Grey and Deadpool which I would be happy to see expanded in next year’s Holiday special.

The best work was done by the regular writers of the X-Men books. As a pet owner watching the happy couple of Rogue and Gambit trying to give medicine to their cat was great. The return of Wolverine from the dead with “#hotclaws” gets a smirky send-up.

We get to Mr. Claremont’s entry which is an inner dialogue of Kate Pryde as she lights a menorah in the remains of the mutant land of Genosha. She decides that the way to make a change for mutantkind is to become President. It is a fascinating thought from one of the originators of the X-Men.

This is a fun issue of X-Men for any comic book fan you have on your holiday shopping list even if they haven’t been reading the regular books.

Disclosure: I purchased my issue of all comics described within.