When an artist can seemingly create art from nothing it is seen as a supreme compliment. In perfume circles the creation of the iconic Rochas Femme under World War 2 conditions by Edmond Roudnitska is an olfactory example of this tenet. Ella Fitzgerald could take nonsense syllables and turn them into a special version of jazz known as scat singing. Great artists have an innate need to create. My favorite example of this comes from artist Henri Matisse and the final works of his career.

In 1941 M. Matisse was diagnosed with cancer and following successful surgery was left confined to a wheelchair. For most that would have been enough of a hurdle to their output that it would be understood of there was no more. M. Matisse instead turned back to the tools of childhood, scissors and paper. This work produced during this time are referred to as The Matisse Cut-Outs. 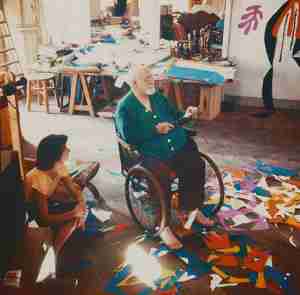 Henri Matisse in his studio in Nice, France in 1952 (Photo: moma.org)

M. Matisse had learned about the techniques of paper patterns, pinning, and scissors from his childhood among weavers in his hometown of Bohain-en-Vermendois. To allow himself a palette of colors to work with he had his assistants color white paper with various gouaches. Then he would begin the process he himself referred to as “painting with scissors”. As he would cut things out he would lay them out with pins. Constantly moving them around on the wall of his studio until the desired effect was achieved. Then his assistant would affix them with glue to a surface. 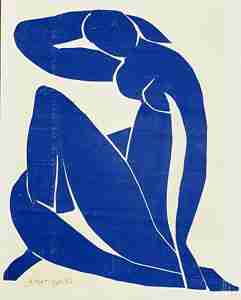 My first experience with them was at the very end of the massive Matisse retrospective at the Museum of Modern Art in New York City in 1993. The final gallery contained these soaring blue silhouettes of a nude woman. I was immediately drawn to them but I also could feel there was something different. They weren’t painted. When I read the legends surrounding these I found out these were massive collages. When I got close you can see the lines of the sheets of paper overlapping. You can see the tiny pinholes as the paper was re-positioned on the wall before being finally glued down. The one pictured above Blue Nude II from 1952 is the one which clued me in to this phase of M. Matisse’s career.

Until his death in 1954 M. Matisse would create primarily with scissors and paper. He would design stained glass windows for churches. In one case he also designed the priestly vestments. The first set of works were collected in a book called “Jazz”. The original sets of colors M. Matisse chose to work with were the ones which would look good when translated to the printed page.

M. Matisse is quoted as saying, “Only what I created after the illness constitutes my real self: free, liberated.” I think that is why I am so enchanted by them because that sense of personal liberation seems so patently on display. M. Matisse found that freedom while in a wheelchair with paper and a pair of scissors.