I am a creature of Holiday traditions. Those of you who have been following along with me over the years have seen me write about many of them in this column. Now that we have truly begun the Holidays one of the first things I will do in the next day or two is to watch the movie “The Family Man”. To me it is a movie which unabashedly celebrates the hope the season brings. 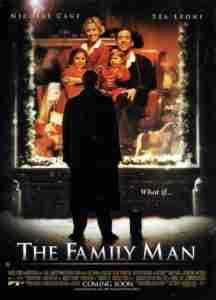 The Family Man is not one of those universally loved Christmas movies. You won’t find it on many lists. It wasn’t well received when it was released in 2000. When I read back over those reviews I am always surprised to find that one of the more consistent flaws found in it was the happy, hopeful, ending. This is what I watch movies at this time of the year for. I think much of the reason for the tepid reception has to do with the director Brett Ratner and the star Nicolas Cage. 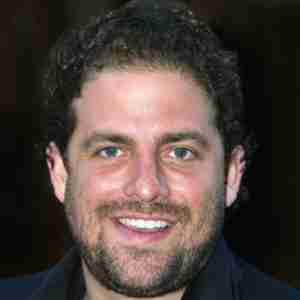 Mr. Ratner had been one of those who had made the leap from music video direction to feature film direction. One of his first videos was for Run DMC’s “Christmas in Hollis” in 1988. By the time, he had finished The Family Man he had a monster hit behind him with the movie “Rush Hour”.

Mr. Cage had been doing movies for nearly twenty years by the time he took on the starring role. By that point you were either a fan of Mr. Cage’s acting style or you were not. I thought casting Mr. Cage in the title role of The Family Man was a great choice because his method is to react broadly to situations which is an asset to a movie like this. 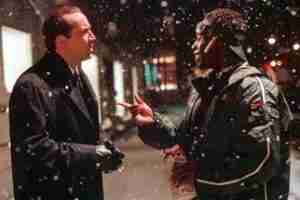 Nicolas Cage as Jack and Don Cheadle as Cash (r.) in The Family Man

The Family Man tells the story of Wall Street mogul Jack Campbell who, when the movie opens, is in the middle of closing a big deal which will require his staff to work through Christmas. Fairly rapidly the movie sets up Jack as the man who has taken the path to business success at the expense of family. As Jack stops at a convenience store he runs into Cash, played by Don Cheadle. Cash is trying to cash a winning lottery ticket for $238. The clerk is suspicious of the ticket causing Cash to pull a gun. Jack using his negotiating skills offers to buy the ticket off of Cash. After the confrontation, Jack offers Cash his help. Cash smiles at him and tells him he doesn’t need his help but Jack is about to be taken on a journey into the path not taken. The next morning Jack wakes up in a house in New Jersey next to the woman he left behind when he went to London to start his career. He has two kids and works at the family tire store. From here the movie is the typical redemption story as Jack gets a glimpse into a man who chose family over professional success. By the end the natural order is restored but Jack is changed.

The Family Man is a beautiful parable on the value of family and friends played against the background of the Holidays. It never fails to scrub away the last vestiges of my crusty edges leaving me smiling broadly at the possibilities of the next few weeks. If you would like to find a new movie to add to your seasonal rotation I think The Family Man is a worthy addition to this time of the year.

One thought on “The Sunday Magazine: The Family Man”