Everyone loves a David versus Goliath Story. The first part of January always presents this opportunity as the Third Round of the English football FA Cup takes place. The FA Cup is the short way of saying the The Football Association Challenge Cup. It is the oldest cup competition in the world starting in 1871. What makes it unique is every team which plays football in England is in the competition. Starting in August the smallest teams begin playing each other in one game knockout matches. Through December each successive round adds in the next highest level of competition until we reach January when the top division Premiership clubs enter the competition. At that point there are 64 teams left from a starting pool of 700+ who play until the Final in May. The final piece of The FA Cup is there is no seeding of stronger teams versus the weaker teams. All of the teams are thrown in a common pot and the matchups come out in the order they are drawn. 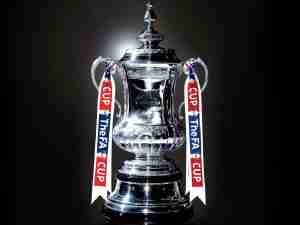 For the smaller clubs just making it to the Third Round and playing the Premiership clubs is a victory. In the lower divisions of English football the players, and their supporters, are similar to American baseball Minor Leagues from A-AAA. Imagine if there was a baseball competition where the Single A Hickory Crawdads hosted the New York Yankees in their 4,000 seat LP Frans Stadium. This takes place in The FA Cup regularly. In this year’s Third Round the lowest level team still remaining is Eastleigh FC. Who hosted a team, in Bolton, four tiers above them. Not quite the Yankees versus the Crawdads but pretty close. 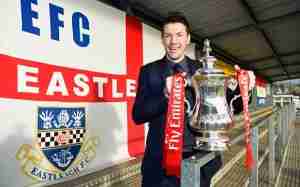 Silverlake Ten Acres Stadium was full to capacity of around 5,000 supporters from this town in England’s south. The Spitfires are the local lads as they took to the field against their higher ranked opponents. After a scoreless first half where the home team looked the equal of their presumed betters; early in the second half they took the lead. Ten Acres was rocking as 5,000 sounded like 50,000. Bolton would fight back tying the game with under four minutes remaining. This will lead to a replay at Bolton in a week’s time where they will determine a winner after extra time and penalty kicks if necessary. After the game the Eastleigh manager Chris Todd walked around the ground applauding the supporters. You felt like he just wanted to soak up the moment. On the other side it looked like Bolton couldn’t get on the train back home quick enough. For Eastleigh the dream lives on for at least another week.

This year’s competition still has many of the smaller teams playing above their classification and it is what makes it so interesting because in most years at least one of the lower division clubs finds themselves a win or two away from the final while collecting wins for club and supporters that will be talked about for years.

I’ll be rooting for my beloved Arsenal to win The FA Cup for the third year in a row but I’ll also be watching and rooting for Eastleigh too. That’s what makes The FA Cup magic.