When I got my first VCR in 1984, I used to have what I called “Bad Movie Wednesday”. I would pick a critically panned movie off the shelf and see what I thought. That exercise has created a list of movies I enjoy because of their flaws.

Being housebound because of quarantine I have been revisiting some of my favorites from back then when something reminds me of them. A couple of weeks ago I was listening to my playlist of all the Meat Loaf songs when something not by him shuffled to the top. It was a song called “Tonight is What it Means to be Young”. It is on the list because it was written my Meat Loaf’s longtime collaborator Jim Steinman for the 1984 movie “Streets of Fire”. I re-watched the movie and caught up on some of what I didn’t know about how it came to be. 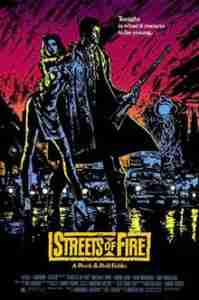 The movie was the idea of director Walter Hill who wanted to make a comic-book movie, but he wanted to write his own hero. He had just come off the huge success of directing the Eddie Murphy/Nick Nolte buddy film, 48 Hrs. That meant he could pretty much do anything he wanted. Once he showed studios the script, he has said it was the quickest a movie was given the go-ahead in his career.

“Streets of Fire” was meant to be the beginning of a trilogy of films featuring Tom Cody as played by actor Michael Pare. It didn’t work out that way. The movie was a huge flop at the box office not even making back half of its budget. I don’t care about any of that. This is a movie that lived up to Billy Crystal’s SNL impersonation of Fernando Llamas, it was better to look good that to feel good.

The movie takes place in a stylized city that never existed. It has similarities to Chicago, LA, and NYC. Tom Cody returns to town after the war to rescue his old flame Ellen Aim who is kidnapped by the head of the city’s motorcycle gang. It all leads up to a final act showdown where the protagonists battle with sledgehammers.

The movie is full of colors which represent the different parts of the city. The cars are all 1950’s era styles while the music is 1980’s power pop. Mr. Hill wanted an unidentifiable landscape where he could impart his sense of style. He gets all of that.

What he also got was a kind of wooden lead actor. Michael Pare plays the hero so low key he is outshone by his sidekick and the villain. What makes the movie fun is an actor who has about two or three emotional gears working against others who have hundreds. In every scene he looks like he is in over his head. When reading about the production they were trying to interest Tom Cruise, Eric Roberts, or Patrick Swayze to play Tom Cody. They took a risk on a relative newcomer and paid the price.

The same risk paid off for the female lead Ellen Aim who was played by Diane Lane. She showed she could deliver outsized exposition with emotion and belief. The scenes between Ms. Page and Mr. Pare are great indicators of who was going to have the larger career.

Finally the music was the fun part. Written by Mr. Steinman the two original songs were part of his rock operatic style of rock and roll. One of the funny things I learned was Mr. Hill had no experience staging musical numbers and the two big set pieces within the film were him learning on the job. It would have been interesting to bring in one of the early music video directors to have provided a hand. But then it wouldn’t be the kind of bad movie I love.