This past Thursday December 16 was like Christmas came a week early for me. That night I sat down in a theatre to see the first showing of the new movie, Star Wars The Force Awakens. Ever since the day I saw the original Star Wars in 1977 it has been something I have cared passionately about. I am not alone in this feeling as on Thursday night the theatre I was at was showing it simultaneously on ten screens. Contrast that to the opening number of theatres on Wednesday May 25, 1977 for the original, 32. What made me so very happy with The Force Awakens was for the first time this felt like Star Wars again. The kind of Star Wars which fired my imagination back in 1977.

There are many that do not like the prequels that George Lucas produced from 1999-2005. Those movies suffered from a narrative problem that we knew where we were going to end with the creation of Darth Vader. That was the biggest problem with those movies for me. I knew there was no way to save Anakin Skywalker. He was going to become Darth Vader no matter what. The movies explained how but it was the earlier movies which provided the eventual redemption. I think that is what stunted my sense of wonder it was like watching a three movie version of a slow motion inevitable train wreck. 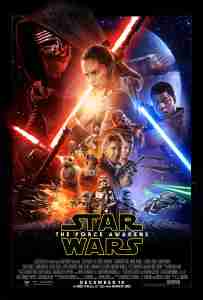 The Force Awakens does not suffer from that as now that the story is moving forward again it can engage the imagination with both the old and the new. I’ll start with the old as our original heroes Luke Skywalker, Princess Leia, and Han Solo return. The Force Awakens lets us know where they are thirty years after we left them in Return of the Jedi. The writers have put all three of them in interesting places full of possibilities, not all of which immediately pay off in The Force Awakens. As much as I enjoyed their return it is the new trio of heroes which really took me back to the wonder of 1977.

Daisy Ridley plays Rey and she is the definitive breakout star of The Force Awakens. She is the analog to Luke Skywalker in the original movies. Eking out an existence on a desert world before being thrust into the middle of galactic events. She is one of the few movie heroines who is completely independent. I wonder at the impact she will have on young girls going to see The Force Awakens. Will they see themselves as the Rey of their own lives. I hope so.

John Boyega plays Finn. His is the story of the reluctant hero as he tries to keep removing himself from the fray only to be drawn back. Mr. Boyega displays the heroism of the heart as he just wants to protect himself and his friends. He is the right mix of humor and emotion.

The final new addition is Oscar Isaac as hotshot Resistance pilot Poe Dameron. He is the alpha warrior of our new trio of heroes and when he is flying is when he is at his best. He is the least developed of the new characters but I know his time will come in the future.

The final actor to mention is Adam Driver as the new villain Kylo Ren. He is a different kind of scary from Darth Vader. The Force Awakens displays his journey to the Dark Side is fueled by his emotional reaction to his life. There is one thing I want to mention there are two pivotal scenes in the movie which there is no dialogue but for the emotion you see on Mr. Driver’s face. It makes all the difference to have an actor in this role that can accomplish that.

Finally I have to thank director and co-writer JJ Abrams. In 2009 he saved my beloved Star Trek and now he has done it again with my equally beloved Star Wars. He truly has become the Geek Savior by saving both of these properties in a way that future geeks can discover them.

The final litmus test for me was when I walked out of the theatre on Thursday night I wanted to go right back in. I hadn’t felt that way since “The Empire Strikes Back”. The very final shot of The Force Awakens holds out the promise that “A long time ago in a galaxy far, far away” still has some amazing stories to tell.