In 1984 I took my first job in Danbury, CT which was about an hour from New York City. One of my friends from college was living in the City. In college he was one of the small group who spent some time trying to learn more about wine. Our birthdays are eight days apart in October. We decided that we were going to work our way through the great 4-star restaurants in NYC on the weekend in between our birthdays over the next few years. The first of these dinners was in the restaurant at the top of the World Trade Center Towers called Windows on the World. Within the restaurant there was a special room called Cellars in the Sky. There they had a seven-course meal paired with wines chosen by the Windows on the World sommelier Kevin Zraly. 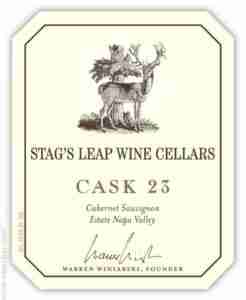 Mr. Zraly was one of the earliest voices to demystify the idea of drinking wine. Moving it from intimidating to welcoming. That night was a catalyst for a number of wine-related things. Mr. Zraly took the time to chat with us. I probably gushed a little bit while speaking too fast. Of all the wines we had tasted that night it was an American Cabernet Suavignon which was my favorite; Stags Leap Cask 23. Mr. Zraly became the first to relate the story of the Paris blind tasting of 1976 in which two American wines won the best in both white and red. The red was Stags Leap. In those pre-Internet days I actually had to go to a library to find the articles written about that tasting. It also fueled my interest in Napa Valley and American winemaking.

Stags Leap became the most prestigious address in all of Napa. So much so that neighboring vineyards started putting on their labels “Stags Leap district”. I was skeptical of this idea of wine from the same region sharing a particular quality. I also believed it had a lot to do with the people making the wine too.

Over the years though Stags Leap has continued to prove itself as a true vinicultural region. In 2007 it actually became the first named American Vinicultural Area (AVA) because of this sustained quality. I was returned to thinking about this when I attended a recent tasting of the wines from Dylan’s Ghost.

Dylan’s Ghost came from a walk through Stags Leap by two of the stars of American winemaking, Aaron Pott and Joseph Carr. Mr. Pott was a graduate of the University of California-Davis wine program after which he spent time in Bordeaux before returning to California and heading up Beringer vineyards. Mr. Carr is one of those raconteurs of wine who once he turned to producing wine under his own eponymous label showed that independent American spirit is what separates the Napa reds.  As these two walked they decided that it was time to do a wine which was a blend of Stags Leap grapes beyond the famed Cabernet Sauvignon. The result is two different bottlings a year Dylan’s Ghost The Beast made up of one-third each cabernet franc, petit syrah, and merlot grapes; and Hell Hollow a near equal split between cabernet sauvignon and cabernet franc.

Much like that night on top of the world I was enchanted by these wines especially The Beast. This is deeply dark wine which evolves on my tongue in waves of dark fruits which segue into a noticeable licorice before it fades. The Beast is as good as any of the more famous Stags Leap releases for a third to half the price. Plus because it is a blend it doesn’t require as much aging to let the tannins die down although the older vintages I tried showed some cellaring does add something.

I think my skepticism at American wine terroir might have just been misplaced pride in the independence which formed the Napa wine community fifty years ago. With wines like Dylan’s Ghost the evidence for Stags Leap is overwhelming.