When it comes to a critic of any artistic endeavor you must agree on a frame of reference. This comes about by reading the critic’s words and comparing them to your experience. The ones which last are the ones which provide insight beyond what you’ve found on your own. With the publication of the recent “Perfumes: The Guide” by Tania Sanchez and Luca Turin there is an interesting perspective provided by short piercing reviews which add up to a greater overall commentary on perfume as art or commerce. This kind of critic has become a bit of an anachronism. When it comes to music there is only one left; Robert Christgau. 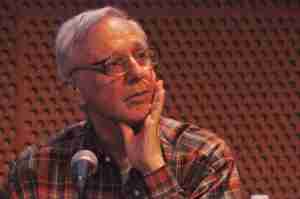 When I moved to the New York City-area in 1984 one of my favorite reads were the music reviews of Mr. Christgau. He was the lead music critic for The Village Voice weekly newspaper. I was on the train from Brewster to Grand Central Station, in September of that year, and I began to read my first “Consumer Guide” where he reviewed a dozen newly released albums. As I looked at the list I agreed with his assessment of the new tunes from Husker Du, Hoodoo Gurus, The Cars, and Miles Davis. Like all good critics it is when they savage what you like, you feel a little twinge. Which is how I felt when next to the label “Must to Avoid” was one of the albums on heavy rotation in my car. Here is his review of it:

SCANDAL FEATURING PATTY SMYTH: Warrior (Columbia) The ryffs keep the treadmyll moving with nary a twytch, not once does a lyric offer a detail of behavior or decor, or even a real metaphor–the sexist twaddle of Nyck Gylder's "stereo jungle child" in the title chartbuster, now transmogrified into lyberated twaddle because a woman is singing, is as hot as it gets. C

Despite that it was always his opposite side of that coin which has provided me with so much music he pointed out to me. From that same column here is his “Pick Hit”:

KING SUNNY ADE AND HIS AFRICAN BEATS: Aura (Island) Three albums into this world-class popmeister's American career, his U.S. debut begins to seem like the compromise purists claimed it was–not because it's too American, but because it's not American enough. Now when I want something subtly polypercussive I'll choose one of his Nigerian LPs rather than Juju Music. And when I want a heavier, hookier groove I'll pull out Synchro System–or more likely, this one. With Martin Meissonnier back behind the glass and Stevie Wonder's earthbound harmonica on native ground, it's every bit as consistent as The Message and–by (Afro-) American standards–considerably more propulsive. At times it's even obvious, regular. Next time I assume they'll go all out for a dance-chart hit. And I can't wait to hear it. A

Within my first year of being a young man in NYC I would be at a show featuring King Sunny Ade and His African Beats.

I look at my giant collection of digital music and realize there are artists I never would have given a try without reading about them first in a “Consumer Guide”.

As the publishing world has changed Mr. Christgau has continued to publish reviews in the same compact style. His current gig is at the music blog Noisey. Just so you know it wasn’t a phenomenal personal memory; just a well-archived website which allowed my trip back to the first column I read.  More importantly at robertchristgau.com all his reviews and other writings are gathered in one place. It is the history of rock music one album at a time.

There is such a consistency to his perspective after nearly fifty years of doing this it is unfathomable to me. Even for me almost thirty-four years since that first column I read he has given me a new artist I’ve listened to over and over; “Oil of Every Person’s Un-Insides” by Sophie.

It is the epitome of what artistic criticism is meant to do. Mr. Christgau has been my guide through rock music and all its iterations.