When I was living in South Florida at the beginning of 1981 I was fully immersed in my weird musical world. I was a punk rock kid. I was a disco dancin’ dude. You can see the conflict. S. Florida was a place where disco thrived. If that was my mood on a weekend, I had options. It was different if I wanted to go clubbing for my other half. There were two choices, The New Wave Lounge in Ft. Lauderdale, or Top of the Colony on South Beach. It was rare that my two worlds touched except for a weekend in the spring of that year.

A bunch of us drove up to The New Wave Lounge on a Friday night. It was this tiny little club in a rundown Lauderdale hotel. It was just the right vibe. The DJ was always right on the edge of any new band coming. That night this song with amazing bass, drums, and synths came out of the speakers surrounding the dance floor. As soon as it was over, I went to the booth and asked what it was. I was told it was Planet Earth from a new band, Duran Duran. It was instantly memorable, and it buzzed in my head on the drive home. 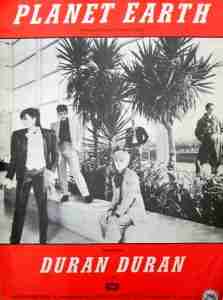 The next night it was time to put on my dancing shoes and I headed to one of the larger discos in the area. It came late in the night as things were headed towards last call. I guess the DJ thought he could sneak something less popular on the turntable because that song in my head from the night before was playing again. I got up and locked into the bass line while I whirled around the dance floor. I looked like I was plugged in when I told this group of friends the name of the song.

I remember thinking what a different kind of song this was that it worked in a crowd of punks or disco dancers. Of course Duran Duran would become one of the huge bands which came out of their MTV exposure a few years later. Some of that success was finding a sweet spot where their music appealed to multiple types of fans.

While I was listening to the current alternative music station, they mentioned that it was the 40th birthday of Planet Earth at the beginning of the month. I cued up the song again and reminded myself what a nearly perfect debut single it was.

I have no idea what the band is up to these days, but I’ll always bounce around the living room when the song is on. Even though my pogo has less hop and my hustle is a little less sharp.; “This is Planet Earth”.