As I think is obvious I am looking forward to the arrival of spring. My desk is flooded with spring perfume releases which is somewhat responsible for my getting ahead of Mother Nature. I am also looking to the time I can head out to the local farms to pick strawberries. My favorite way of employing strawberries is as part of a classic cocktail called a Pimm’s Cup.

The very name of the cocktail causes confusion because the liquor used to make it is called Pimm’s No. 1 Cup. Although a Pimm’s Cup has a few other ingredients which I’ll get to. The liquor itself has an interesting history.

Pimm’s No. 1 Cup was introduced in 1851. It was a gin-based liquor infused with a secret mixture of herbs. In the early days it was meant as a digestif served in a small “No. 1 cup” thus the origin of the name. There would eventually be Pimm’s No. 2-6 Cups each with a different liquor base. All of them have disappeared except for a version of Pimm’s No. 3 Cup which was brandy based. It shows up on shelves under the name Pimm’s Winter Cup during the Holidays.

I discovered Pimm’s a few years ago when on a visit to the liquor store I was given a glass of Pimm’s No.1 with fresh strawberries muddled with it. It immediately caught my attention and I purchased a bottle to experiment with in my neophyte cocktail laboratory. Early on I found the classic cocktail recipe called a Pimm’s Cup. 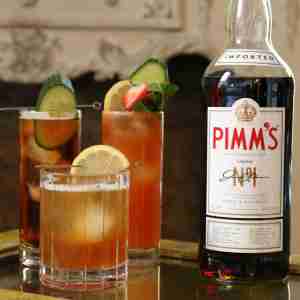 The Pimm’s Cup is very English cocktail. It can be purchased when attending such very British events like the Chelsea Flower Show or Wimbledon. The Pimm’s Cup’s basics are simply Pimm’s No’ 1 Cup plus lemonade. The variation is you can almost add anything which is growing to the mix to turn it into a current harvest libation. The combination with lemonade is so refreshing that even just that is often enough but it gets much better if you experiment by adding some different ingredients.

My favorite addition is basil and fresh strawberry. I am not sure if it is because my first taste of Pimm’s No. 1 Cup was with strawberry but in conjunction with the tart of the lemonade it is my favorite cocktail of the spring. I have seen the Pimm’s Cup described as the “gardener’s cocktail” and it seems appropriate as I’ve added cucumber, blackberries, peach, orange, apples, parsley, chive, dill, lemongrass, and lavender. Whatever is growing can go into the glass.

While I have found many variations on the additions to the lemonade and liquor; Pimm’s No. 1 Cup has not proven to be as versatile as an ingredient in other cocktails. It really seems made for one best purpose and that is in a Pimm’s Cup.

Here is my spring recipe for a Pimm’s Cup

In a tall glass take a fresh strawberry and mash it up with a shredded basil leaf.

Add ice followed by lemonade and stir with a long spoon.

Once the first fruit and herbs of the season start appearing in your area give the Pimm’s Cup a try.