I don’t know what they call it when you psychologically root for the criminal in a movie or tv series. I know the first time I became aware of it was while watching the movie “GoodFellas”. As the Feds close in on Ray Liotta’s wiseguy, he is trying to frantically flush a stash of cocaine down the toilet. As I watched in my head I was saying “C’mon, c’mon, get it flushed”. I’ve gone through this with many series “The Sopranos” or “Breaking Bad” are other examples. The latest version of this is “Ozark”. 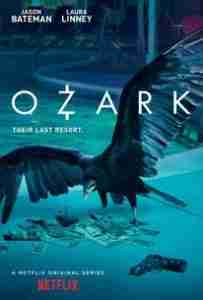 Ozark is a hybrid of both series I mentioned. We are presented with Marty Byrde who we quickly learn is a money launderer for a drug cartel. His partner skims some money and they are all about to be killed. Only Marty has a far-fetched plan which is accepted before they pull the trigger. He must pack up his entire family and move them from Chicago to Lake of the Ozarks Missouri to try and pull off this tenuous idea to save their lives. A lot of shows spend time having the criminal try and hide his behavior from the family. In Ozark, the entire family knows the truth and the danger. It increases the risk, but the writing makes it work as each family member knows a mistake leads to them all being killed.

The first season is premised on the tension of whether Marty can launder the amount of money he promised in the short amount of time he promised. The interaction with the locals brings him up against two local families; the Langmores and Snells. They are also criminals, but these are the ones I want to not succeed. It is the beauty of the story being told that the Byrdes I want to see “win” while these others I want to see “lose”. The entire first run of ten episodes builds one tension-filled brick atop another. By the end Marty has another wild plan to offer. Which leads to seasons two and three.

The writing on this show is impeccable. Over the course of the first three seasons it has shown Marty’s wife Wendy Byrde evolve from scared for her life wife to embracing and expanding the criminal enterprise. When there is a moment when they might possibly make a run for it and leave it all behind, she chooses to stay. Actress Laura Linney plays Wendy and she has shown a spectrum of emotions throughout the three seasons. She has become the reason I watch the show.

That is not to say the other main players are not great as well. Jason Bateman as Marty and Julia Garner as Ruth Langmore complete the trio of criminals I just keep rooting for. Their performances have made me sympathize with all three of them.

This isn’t uplifting fare for these uncertain times, but I enjoy great acting and writing no matter the subject matter. Ozark has all of that.

2 thoughts on “The Sunday Magazine: Ozark”