One of my favorite cartoons when I was a child was a segment on the Rocky & Bullwinkle Show called “Fractured Fairy Tales”. In these vignettes the well-known fairy tales were twisted to tell a different story. All of them narrated by Edward Everett Horton it was like having an out-of-town uncle tell you the story you thought you knew in a different way. The current version of “Fractured Fairy Tales” has been unspooling for the last seven years under the name of “Once Upon A Time” on ABC.

The show was created by two of the writers from the show “Lost”; Adam Horowitz and Edward Kitsis. Their idea of the show antedated their time on “Lost” but they found no one was interested in a show about twisted fairy tales. Once “Lost” ended they pitched it to ABC again and this time their concept was picked up. 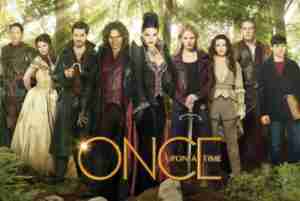 The story in the beginning was about a small town in Maine called Storybrooke where The Evil Queen had ripped all the classic fairy tale characters to the very not enchanted present day America. Only three characters were aware that they were under a curse; The Evil Queen, Rumpelstiltskin, and the Evil Queen’s son Henry. Henry comes to realize he is the son of a woman named Emma Swan who he needs to make believe that there is such a thing as magic. Henry tricks Emma to come to Storybrooke so she can live up to her role as The Savior.

For six seasons we watched as an extended cast of fairy tale characters would deal with present day dilemmas paralleled with flashbacks to their time in the Enchanted Forest. As it was with “Lost” those flashbacks provided the audience understanding into the basic nature of a character even when they didn’t remember who they were. Prince Charming and Snow White always tried to be the positive solution even when they thought they were David and Mary Margaret. At the end of last season many of our character arcs found their “happily ever after”. This final season has been very interesting as the original villains; The Evil Queen and Rumpelstiltskin are trying to find theirs. It is a testament to Mr. Horowitz and Mr. Kitsis that I am very much hoping for that result to two characters I loved to hate in the early years of the series.

On May 18 the last page of “Once Upon A Time” will be turned. I am hoping it will be a grand send-off where even the darkest villains can change to find their happiness.