If there is anything readers of this column should know after six years, it is this. I love noir. I love non-linear storytelling. I love graphic novels. I love good writers. When all those things come together it is a gimme that I will want to write about it. The new graphic novel November by Matt Fraction checks all those boxes. 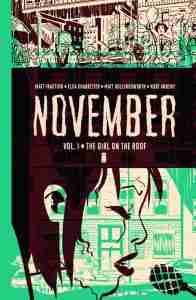 November is a story being told in three volumes. The first one came out last year and volume two a few months ago. I thought the first volume was amazing, but I wondered if it could continue. Volume two was even better. I believe in Mr. Fraction’s ability to tie up everything he has put in to play.

The plot was inspired by a real-life incident outside the home he lives in. There was a significant police incident outside his front door. A few days later they would discover a gun in one of their bushes. They called the police. Mr. Fraction’s mind did the “what if?” a person didn’t. November is that story spooled out through three women he describes as “a survivor, a Good Samaritan, and one struggling against her own obsolescence.” 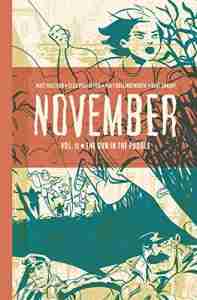 As I mentioned the narrative jumps back and forth in the time frame covered. Mr. Fraction is such a talented writer that it isn’t always apparent when we are at the beginning of a conversation. It is that which makes November such a fun read. I was constantly trying to put the pieces together. Much of it feels like a verbal jigsaw puzzle where the outside frame has been completed but the picture on the inside is still forming.

Elsa Charretier is the artist working with Mr. Fraction. She seems to enjoy laying out this dialogue in equally interesting visuals. There are a couple of scenes where her panels brilliantly mirror what is happening.

I am being purposefully obtuse about the plot because much of the enjoyment of this is figuring it out for yourself. November is worth spending some time with.

Disclosure: I purchased the book being reviewed.

One thought on “The Sunday Magazine: November by Matt Fraction”