For those of you looking for my top 25 new perfumes of 2019 it will be posted tomorrow. Today I take a break and list some of my favorite non-perfume things of 2019. There is a small devoted following to this column which has always made me happy which is why I like to have a year-end list for them, too. There is more to life than perfume here are some of the things which make it better for me.

Favorite Movie: “Once Upon a Time in Hollywood”- I am an unabashed fanboy of director/writer Quentin Tarantino. I think this might be the best movie he has made. It is his version of 1969 Hollywood part reality, part fantasy. It has been an interesting aspect of the recent films by Mr. Tarantino in that he likes to imagine some “what-ifs” then plays them out within his films. This movie captures the moment where the lines between movie stars and tv stars started to blur. Leonardo DiCaprio and Brad Pitt are fantastic as an action movie star and his stunt double. They are the core of the movie. What elevated the entire movie was the performance of Margot Robbie as actress Sharon Tate. When she goes to a movie theatre to see her own performance, with an audience, she exudes the joy of seeing herself on screen. Mr. Tarantino has always worn his love for movies and moviemaking on his sleeve. This movie was a big valentine to all of it.

Favorite TV Show: “Watchmen”- Oh boy did I expect to find a god-awful mess in this update to the graphic novel by Alan Moore and Dave Gibbons. Damon Lindelof, who oversaw this, is a creative mind who sometimes finds a way to sabotage his own good work with endings that don’t hold together. None of that happened here. Mr. Lindelof honored the source material while spinning it in an entirely different direction. It gave new perspective on the original while telling its own new story. This time the ending was perfect with a final shot I have been thinking about since the screen faded to credits. 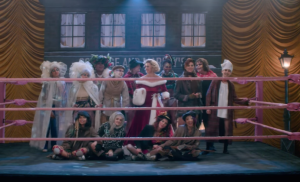 Favorite TV Episode: Season 3 Episode 10 of GLOW “A Very GLOW Christmas”- Before Watchmen appeared GLOW season 3 was going to be my favorite show of the year. There are times when a series finds everything that makes a show special and wraps it up into a gift to its fans. That was the way this season finale played out. With the framing device of the Gorgeous Ladies of Wrestling putting on a version of “A Christmas Carol” in the ring. The characters are each given moments to find their truths. The final one coming on an airplane jetway between the main female protagonists was brilliantly done because of the acting of Alison Brie and Betty Gilpin saying the words of Liz Flahive and Carly Mensch. The show premiered in August, but I re-watched this just before Christmas and it was even better.

Favorite Album: Vampire Weekend “Father of the Bride”- It had been six years since the band released anything new. I have enjoyed the previous releases because they have felt like an extension of early bands like The English Beat. In this latest album the continuing evolution of that sound surprised me with its poignancy. The music still makes me want to move but the lyrics keep my feet on the ground.

Favorite single: “Hallelujah” by Haim– It has been a fun year to be a fan of the sisters Haim. They didn’t release a new album. Instead we got new releases via YouTube drops out of the blue. The last one of the year, came just before Thanksgiving. “Hallelujah” was inspired by the loss of Alana Haim’s best friend to a car accident when she was 20. The song builds to her verse as each sister finds the thankfulness for their bond before Alana closes with words to her friend. “Hallelujah” has become the new song added to my Holiday playlist even though at first glance it might not seem to be one. For me it is this time of year when we do remember to say Hallelujah for our friends and family.

Favorite Book: Black Leopard, Red Wolf by Marlon James– This is the best introduction to an epic fantasy series in years. Marlon James tells a story from the perspective of a character who might be an unreliable narrator. There are all the accoutrements of classic fantasy. The difference is this ability of the reader to know whether they are being given the whole truth. My understanding is the remaining two books of the trilogy are going to be the same events narrated by a different character in each book. Mr. James has hit upon a fascinating way to tell a story. I can’t wait for the other two books to complete the story.

Favorite Comic Book: House of X/Powers of X– I’ve lost count of how many times they have rebooted The X-Men over the last twenty years. For the first time writer Jonathan Hickman has made me interested enough to become a consistent reader of the X-books again.

To all the readers of this column thank you for reading throughout the year. Happy New Year to all of you.