In hindsight it is very easy for me to pin down the moments which started me on my affection for many of the things I enjoy. My love of mysteries began with a Christmas present of a complete volume of all of the Sherlock Holmes mysteries by Sir Arthur Conan Doyle. I never became so much of a fan as to become a Baker Street Irregular. My admiration of Sherlock’s logical way of breaking down a mystery obviously would appeal to the budding scientist. Unfortunately Sir Conan Doyle only gifted us with a finite amount of stories. What is amazing about that is so many other creative people have put forward their interpretation of Sherlock that it has the effect of making those stories feel brand-new.

When it comes to the visual interpretations of Sherlock you could say we are living in a golden age. Benedict Cumberbatch is assaying a controlled misanthrope on BBC’s “Sherlock”. Jonny Lee Miller is interpreting the great detective as a man on the ragged edge as his demons nip at this heels in CBS’ “Elementary”. The writers and actors on these shows are clearly having a great time taking the established mythos and finding interesting places to change it up. 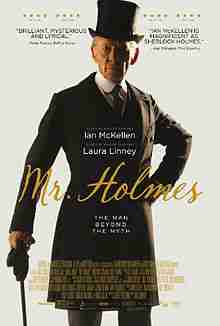 Both of these series are about a Sherlock transposed to the modern day. The new movie Mr. Holmes starring Sir Ian McKellen as Sherlock takes place in the originally portrayed time period on the page. This story is about Sherlock at the age of 93. Age is starting to fray the magnificent instrument that is his mind. He has returned to an English countryside cottage after a trip to Hiroshima to acquire a tree called prickly ash which is supposedly able to stave off senility. The young son of the housekeeper, Roger, asks Sherlock questions about an unfinished story Sherlock is writing. Roger is told it is the true story of his final case not that over sensationalized nonsense Dr. Watson wrote. The movie proceeds to follow Sherlock as he tries to remember the facts and circumstances of that final case while his mind is failing him.

Mr. Holmes is not an exquisite mystery. Instead it is a study of a man considered a genius facing the loss of the facility to still be considered that. Mr. McKellen is an extraordinary actor who portrays Sherlock over a 35-year span. As a younger man there is feline grace to his pursuit of the truth. As an old man the same doggedness of pursuit remains but it is more graceless. Mr. McKellen communicates so much in this movie with facial expressions without a word being spoken. It is a bravura performance by an actor with a resume full of them.

If you are looking for a break from the superheroes, dinosaurs, and cartoons give Mr. Holmes the chance to show you acting that is more special than any effect in those bigger movies.

One thought on “The Sunday Magazine: Mr. Holmes”