I have written in the past about how much I admire writer Brian K. Vaughan and the stories he tells in comic books. One of my favorites was the series he created for Marvel Comics called Runaways. The premise is simply related; what if a group of teenagers discovered the yearly gathering of their parents was to gain power by sacrificing a human? It is one of the great aspects of Mr. Vaughan is how a simple premise has so much to discover. It is with trepidation when I hear something I admire as much as Runaways is being adapted for television. This leads to something I must start letting go of. In this new television universe being optioned to be made as a tv show does not mean it has to be bad. The transition of Runaways the comic to Marvel’s Runaways on Hulu is a success story.

It started at the top when Josh Schwartz and Stephanie Savage were brought in as showrunners. They have a knowledge on how to get authentic teenage voices on screen from their work on “Gossip Girl”. Mr. Schwartz created one of my favorite riffs on an action series in “Chuck” so I felt that would also be a great fit for Runaways. The thing which made me happiest was hearing Mr. Vaughan was along for the whole process adding his suggestions which the production team had sought out. 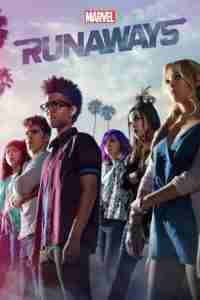 Runaways takes place in Los Angeles which is a fun place for a Marvel Universe series to happen in. There are few of the typical Marvel superheroes on the west coast let alone LA. It allows Runaways a chance to breathe without wondering about if, or when, a more recognizable Marvel hero will pop up. That allows the first ten episodes which just finished to focus on the core team and serve as their origin story.

This is an interesting choice to make as this is perhaps the most in-depth origin story ever done in the Marvel Cinematic Universe. Through this we learn the stakes. Meet the bad guys/ parents. Each one of the Runaways gets to slowly discover who they are and what they bring to the team. The first two episodes are a great example of this pace. In the first episode our team of Runaways discover their parents dark secret and it is all from their point of view. Episode 2 is the same events from the parent’s perspective. It is 360-degree storytelling which allows for the audience to have an opportunity to connect with a sprawling cast quickly.

Mr. Schwartz and Ms. Savage have an eye for young actors and have assembled a cast of memorable ones for Runaways. They feel the paradox of having to save the world from your parents while also learning they have the abilities to actually do it.

Throughout the first ten-episode season the stakes get progressively higher until our team of teenagers become runaways in the final act of episode 10.

I thought this was a great way to finish the first season. Season 2 can be the showdown. By going slow I am now invested in these characters and am looking forward to their growth into the heroes they are destined to be.