When happens to a superhero when they are used to do bad things? It isn’t a question which is asked often on the page or on film. Usually the biggest conflict is making sure they are doing good for the right reasons. The second Marvel Netflix series, Marvel’s Jessica Jones, goes places no Marvel series has gone before.

The story is of Jessica Jones who was a superhero who fell when she was mind controlled by a villain named Kilgrave. He made her use her powers for his own unpleasant ends. It isn’t until he asks her to kill someone that things begin to change. When we meet Jessica at the beginning of the series this is a woman in the throes of PTSD. She is free of Kilgrave but he is still inside of her head. Drinking is how she drowns out the voice. Since she has given up being a heroine she, now, is a private investigator. Her clients in the opening episode are parents looking for their daughter, Hope, who has gone missing. This gives the audience the opportunity to see how competent Jessica is as a PI. When she finds Hope she also finds that Kilgrave is back. What that means leads to a harrowing final act of the first episode. 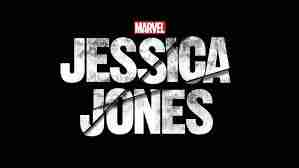 I saw the first episode at New York Comic Con and had to wait six weeks to see episode two through thirteen. The subtext for the series is control. The very woman-centric cast are all looking for ways to control others. The show does not shy away from showing the effects of this psychological violence as it is wielded not just by our villain but also by others for their own self-centered reasons. Kilgrave’s destruction of free will and the gruesome collateral damage is no less horrifying than a stage mother making her daughter vomit to “keep the weight down”. Or a married lawyer trying to manipulate her current wife into a divorce so she can marry her current lover. If there is a moral to Jessica Jones it is the act of manipulation and control through special powers, or human duplicity, is massively destructive. 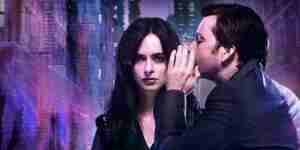 Krysten Ritter as Jessica Jones and David Tennant as Kilgrave

Showrunner Melissa Rosenberg has a cast of multi-faceted women all looking to find a way to survive. Top of the list is Krysten Ritter as Jessica. Ms. Ritter allows all of the internal loathing present in Jessica to be seen without saying a word. She portrays Jessica perfectly. The other huge performance in the series is by Rachael Taylor as her adopted sister Trish Walker. She has always known about Jessica’s powers and is the only anchor which keeps Jessica from being lost. In a pivotal moment in the series the ability of Jessica to say “I love you” to Trish is a beautiful realization. Throughout the series via flashback the story of Jessica and Trish is told. Carrie-Anne Moss plays lawyer Jeryn Hogarth, who was a man in the comic this is based upon, the baddest shark in the tank.

Of course no heroine can truly soar without a villain and David Tennant’s portrayal of Kilgrave is the equal of Ms. Ritter’s. Their battle of will throughout crackles with emotional energy and it is both actor’s performances which provide the charge. As one who was a huge fan of Mr. Tennant’s version of Dr. Who; Kilgrave has some of the same manic energy but this time perverted into the ultimate invader of a person’s free will. Each moment Kilgrave shows the extent of his power it is frightening.

Jessica Jones pulls no punches and takes on its issues head-on. You don’t hear the word rape until well into the later episodes but the writers say it without saying it. There have been gratuitous portrayals of this violent act for shock value in too many series to name them. In Jessica Jones you not only feel the violence behind the act, you see the rest of the damage; all without ever showing the act itself. I applaud the whole creative team for this.

Finally, Jessica Jones is the most mature Marvel property yet. Sexuality is honestly portrayed. Psychological violence is seen up close and personal. Actual physical violence is also frequent and brutal. The original comic book series “Alias” by Brian Michael Bendis and Michael Gaydos was the first Marvel Max release meant for age 18+ audiences. Marvel’s Jessica Jones is the first visual representation of the Marvel Universe meant to be seen by that same audience. It is great visual storytelling of a story not seen before.