When it comes to perfume I laud those who take risks. The same applies to fashion. Except I usually have to look to the runway shows in Milan or Paris for the truly avant-garde. New York is where business is on top which means those shows rarely move too far afield. It has defined an era of American couture which is about strong silhouettes, color, and impeccable tailoring. Which makes attending any edition of New York Fashion Week an exercise in wondering which designers will rack up the most sales. An example of the last thirty years of this kind of thinking was on display in the collection of jewel toned sportswear Ralph Lauren displayed early on the final day of New York Fashion Week. As the final show of the Fall 2016 collections was ready to start I expected more of the same. Marc Jacobs sent something out which was one of the most avant-garde collections I’ve seen in New York of my recent memory. 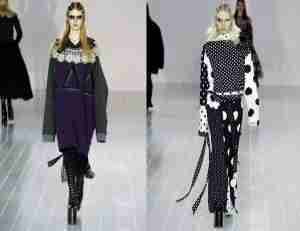 It is a funny thing about Mr. Jacobs on the fragrance side of things where safety and flankers rule the day. Over the last part of 2015 I noticed a subtle shift in the perfume to something less safe willing to take some chances. The couture in the Fall Winter 2015-2016 collection took that all the way. In pre-show interviews Mr. Jacobs said the starting point for this collection was the character Lydia from Beetlejuice, played by Wynona Ryder. It seemed like the entire collection was meant to be Lydia’s wardrobe for the foreseeable future as it was emo goth chick through and through. With only a few exceptions the dominant palette was black, grey, and mauve. A fashionable goth’s dream. It was the antidote to every show which preceded it. 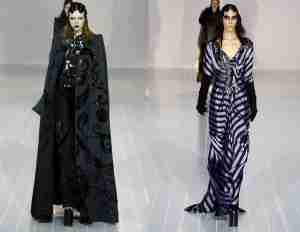 My favorite looks were what Lydia would wear when she pledged Delta Delta Delta in her college years. A mauve affair with the letters right out front. On her first day of work she would wear the polka dot pantsuit with trailing ribbons of fabric. To ward off the chill she would wear the sequined cape full of strong detail. Finally, for a night out she would become the elegant goth in the purple striped gown.

The entire collection has things worth looking at and the video of the entire runway show is above. I wanted to stand up and cheer at what I had just seen. Mr. Jacobs might have just changed the way American couture will be seen.