Every July since 1986 I look forward to the yearly running of the bicycle race known as Le Tour de France. Every year some of the greatest athletes in the world race for a little over three weeks riding throughout France. In even numbered years the riders travel the country in a clockwise fashion and in odd numbered years they go counterclockwise. The race is composed of twenty-one daily challenges called stages. The rider who arrives in Paris in the fastest time is the winner. Throughout the race the riders will ride by themselves in an individual race against the clock called a time trial. They ride up the side of impossible mountains in the Pyrenees and Alps with names like the Col de Tourmalet or L’Alpe D’Huez. They spend days riding over one hundred miles. No matter what today’s challenge is tomorrow presents a new one.

What sounds like it is an individual sport is actually an incredibly orchestrated team sport. Every rider who is in contention to win Le Tour is supported by eight other riders. Throughout the race these teammates bear the burden of chasing down riders from other teams if it seems like they are getting too far ahead. They pace their leader up the most severe climbs. At the end of a stage where there is a mad dash for the finish the best teams will co-ordinate to spring their leader free to sprint to the finish line. I have attended a few professional cycling events and I remember seeing this happen over the last half a kilometer as three teams had formed at the head of the pack, also called the peloton, and like the gates opening at a horse race three riders sprung from the crowd to battle for the finish line. 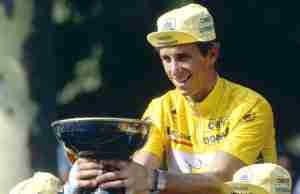 Like most Americans my interest in Le Tour coincided with the rise of the first great American cyclist Greg LeMond. He had gone where no American rider had gone before joining the powerhouse, think Yankees, team Le Vie Claire where he was being groomed to succeed French legendary rider Bernard Hinault, nicknamed The Cannibal, for his ferocious competitiveness. In 1984 LeMond was supposed to support Hinault’s attempt to win a fifth Tour de France. It was clear throughout that race LeMond was the better rider but he buried his ambition with the tacit agreement next year Hinault would return the favor. The 1985 race was a soap opera of Lemond and Hinault vying for leadership of the strongest cycling team in the world. It wouldn’t be until two-thirds of the way through the race that LeMond would finally put Hinault behind him in terms of team leadership and the standings. That day he became the first American to wear the yellow jersey signifying the leader of the race. He would wear yellow all the way to the final finish line.

Back in 1984 it was difficult to follow the happenings in France. In 2015 there are so many ways for me to keep up it is facile to find out what is going on. There is now live coverage on American television. The official Le Tour website gives real-time updates throughout the race day. For the next month perfume gets shunted to being my second favorite French thing as Le Tour moves to the top for July.