As the celebrities I have grown up with begin to pass away I find that each one hits me with a different level of impact. Once it happens I am often surprised at which ones I subconsciously feel the most. This week was one of those surprises to me when the news of comedienne Joan Rivers passing away at 81 was reported. I felt the news right in the pit of my stomach as my eyes teared up. Why did this hit me? I think it is because I admired her make no apologies, take no prisoners approach to life. I have a bit of that attitude as well and I think it was nice to see someone succeed to her level while not being afraid of confrontation.

I first became aware of Joan Rivers as Johnny Carson’s frequent guest host throughout the 1970’s. She would be named permanent guest host in 1983. She was the perfect contrast to Johnny’s style as interviewer and it was always a refreshing change when she was in charge. The other part of this was female comedians were pretty much unheard of and her success would inspire almost every successful comedienne you currently know. It was assumed by many when Johnny left Joan would eventually be the host. It didn’t work out that way as she tried to start a late night franchise on the fledgling FOX Network in 1986 called The Late Show Starring Joan Rivers. In what she would describe in later years as one of her biggest mistakes she didn’t tell Johnny she was doing this. When he found out he banned her from The Tonight Show and that ban was upheld by Jay Leno throughout his time as host. The Late Show Starring Joan Rivers was cancelled after two years on the air after she refused to allow her husband Edgar to be replaced as producer. This humiliation would lead to Edgar committing suicide and Joan disappeared for a while. By 1989 she returned with a daytime show The Joan Rivers Show which ran for five years. 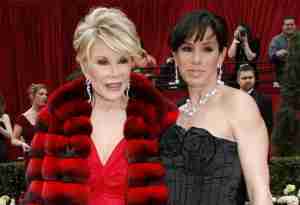 Joan Rivers and her daughter Melissa at the 2007 Academy Awards

It was on that show where she began to comment on red carpet fashion and it would lead to her covering the red carpet arrivals for the Golden Globes and Academy Awards in 1994 for E! Joan Rivers may be one of the most influential fashion people ever because of this. As she asked star after star “Who are you wearing?” I imagine many viewers were hearing fashion names like Carolina Herrera or Vera Wang for the very first time. This was in stark contrast to runway fashion as here were real live women, albeit Hollywood stars, wearing haute couture. In my opinion it made high fashion more accessible to everyone and it was in no small part to Joan Rivers’ way of presenting the fashion in a positive way. Twenty years later every red carpet is covered extensively by multiple networks and fashion designers become household names because of this exposure. Every one of them should say a prayer of thanks to Joan Rivers for starting this.

I never met Joan Rivers but we did stand next to each other during a Tory Burch fashion show at New York Fashion Week a few years ago. I was impressed at how engaged she was with the fashion as it was presented and it was that passion that allowed her to make those red carpet appearances so influential.

It was only appropriate that her last televised appearance was the next day post-mortem of the red carpets for the Emmy Awards and MTV Video Music Awards. Two days before her ill-fated operation. I like that my last memories of her is in full on red carpet mode leaving us laughing until the very end. Every time I watch an awards show I will miss her; but mostly I will miss her unapologetic way of living life and leaving us with a laugh.