It was four years ago on January 2 when we adopted Jackson from a rescue organization. Ever since the first post of the year in this column has been about his last year. I’ve also realized this post is a little bit about my last year, too. Plus Jackson is probably the second most asked about subject in e-mails. 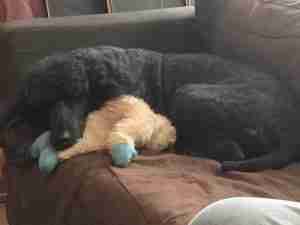 At the beginning of the year Jackson was an only poodle. Henry passed away the previous November. Mrs. C is the word on if or when we adopt another dog. I knew Jackson was going to have company when she started looking online to see what was available. By the end of February she had found a seven-year-old black poodle, Pooch, who’s owner was unable to take care of him anymore. We went and got him the first week of March just before everything shut down, including Poodlesville.

Just like most everyone else Jackson has spent the year in quarantine with us. Mrs. C and I made the decision early on to minimize contact with the outside world. Which meant that my two-year long process of acclimating him to the world outside the yard was also paused. Jackson was left entirely alone in the year before we got him. Which means he is very cautious at any new experience. Except other dogs. 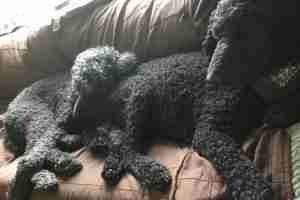 When we brought Pooch home the two of them spent an hour in the back yard. I held an imaginary conversation in my head as Jackson gave him all the 411 on Poodlesville. One funny thing that happened is in our big back yard we have a stand of trees and shrubs we call “the island”. Every dog we have had has run around it without going into it. Pooch dove right in that first hour, bursting out the other side. Jackson stood there as if he had discovered a new thing. Which of course he had. When I look out in the backyard these days and can’t see them. I am likely to see two black dogs leap out of the island in a breakneck run to the porch.

Both dogs but especially Jackson have become my surrogate for human contact. I am pretty sure I have hugged him more this year than the previous three combined. He also has an ability to make us laugh which has been invaluable.

It looks like it will be a few months before Jackson and I can get back out beyond the confines of our yard. For now we walk the perimeter every day. Pooch has also taught Jackson to nip at the back of my heel to encourage me to play. This is the first set of poodles that have coordinated their play. I am often throwing a toy while the other one is bringing back “his” toy that I threw before. It has been funny to see both dogs choose to collaborate like this. My throwing shoulder is getting stronger as a result.

Like I said this is about Jackson but it is also a little about everyone else in Poodlesville. We are all looking forward to the day, soon, when we can be back out in the world.

One thought on “The Sunday Magazine: Jackson Year 4”