As someone who writes a blog and puts their words out there you have a question which is hard to answer. Is anyone reading? I have all manner of metric measuring tools which give me the answer in graphs and percentages. I’ve realized over this past year that fundamental question carries a deeper corollary. Does anybody care? The best analytic site can’t give me any insight into that. My best way of measuring that is a single sentence added to the end of a lot of the e-mail I’ve received this year. It goes like this, “Give Jackson a scratch for me?” Or “How’s Jackson?”

I introduced our black standard poodle, Jackson, here in this column a year ago. We adopted Jackson on January 2, 2017, what is called “Gotcha Day”, from a rescue dog organization. As I recounted in last year’s column much of the first year was convincing Jackson I wasn’t the scariest thing in the world. By the end of his first year that was mostly accomplished. It taught me patience and love can cure a lot of ills. 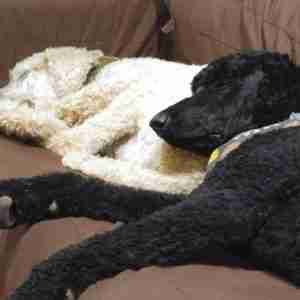 The first year was giving Jackson the socialization he was denied for his first year of life before we adopted him. He came to trust his new pack members; me, Mrs. C, and our other older rescue poodle Henry. By the end of that year within the confines of Poodlesville he was a happy confident young canine.

One of the things that was left to do was take him out into the rest of the world outside of home. I knew he was going to go back to being scared. I just thought it was important to start giving him the chance to learn there weren’t dragons on the other side of the fence.

What this has meant is four or five days a week I put Jackson on a leash and take him on a walk. We are lucky to have many options within a short drive of home to walk him. To start I just took him to the wide common park in the center of town for a few laps around it.

Our first excursion was one of half curiosity half fright. Every noise and other person we walked past glued him to my thigh; making sure I was between him and the perceived threat. The tail was tucked the entire time we took that first walk. The worst moment came when we walked by the flagpoles and the wind made them clank against the lanyards. I thought Jackson was going to jump in my arms. 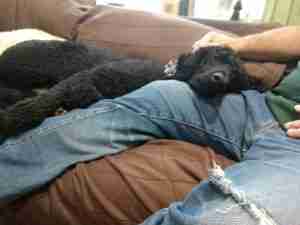 Jackson taking a nap on his favorite pillow…..me

Ove a few weeks things got better. The tail began to move upward. The sniffing began. He jumped up excitedly when I picked up the leash. He even cried at me one day when I drove by the park to use the bank drive-thru. He got very used to the commons. Except for Halloween. Our town has a scarecrow contest where various organizations put up scarecrows. As they went up Jackson noted them but seemed to ignore them. Until the one which was made from a posable skeleton reaching out towards the path was installed. Every time we got to that corner of the common Jackson would drop his tail and keep an eye on it until we passed. At which point the tail began to wag again.

Because of the scarecrows it seemed time to expand our horizons. I began taking him to a park which had a wooded trail. The trail remains a sensorial overload for him which vacillates between momentary fright and poodle inquisitiveness. He still isn’t fond of the way a dog in one of the houses barks at him.

One day we got to the park and the trail was closed while they did some repair work on it. There was still a large soccer field to walk around and I thought we could do that. What made this interesting was there was a team practicing on the field which was taking a break. I came upon one of the young men playing as we turned a corner. Jackson hugged in close to me. The boy asked if he could pet him. I told him to be cautious and bend down to Jackson’s level. He did everything correct in approaching an unfamiliar dog. Jackson was soon getting his ears scratched by a stranger. Unbeknownst to him was a few teammates had come looking for their missing man. As they approached, they began to scratch Jackson all over his back. Jackson’s eyes opened as soon as he felt the first unfamiliar hand. Then as soon as he was receiving an all over scratch his eyes closed in pleasure and the tail wagged.

Like my readers when we walk past the boys practicing they ask, “How’s Jackson?” My answer is to all who ask, “He’s doing great!”

One thought on “The Sunday Magazine: Jackson Year 2”