Every year as I share my odd Holiday traditions in this column, I inevitably receive an e-mail which asks if I do anything classic. I generally answer there are a lot of things happening in Poodlesville that are going on in other homes. I just like writing about my peculiar choices because I enjoy sharing them. As we get closer to the actual day, I have a set of traditions that are similar to many. One is on the final Saturday shopping day of the season I sit down to watch the 1946 movie “It’s A Wonderful Life”. 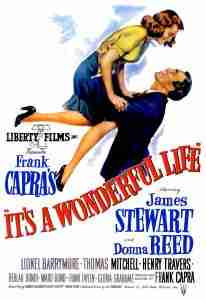 “It’s A Wonderful Life” is the movie counterpart to Charles Dickens’ novel “A Christmas Carol”. Both show the main protagonist what their life could be had they made different choices. In the case of “It’s A Wonderful Life” it shows the difference one selfless man makes. That man is George Bailey of Bedford Falls. He has become so despondent he considers suicide. Then an angel named Clarence arrives and shows George how different things would be if he had not been around.

Jimmy Stewart plays George Bailey and it his performance that sells the entire movie. It is especially amazing as Clarence is briefed before he goes down. We are shown George’s life. How he has always sacrificed his ambition for the greater good. When Clarence finds George at the bridge ready to jump Mr. Stewart sells the man who feels he has lost everything. There is a moment when director Frank Capra closes on Mr. Stewart’s face; without a word the anguish and despair is conveyed through facial movements. It is what sets an actor apart from one who recites lines.

As Clarence arrives, he shows George what life would have been like if he had never been. This part of the movie is as dark as any movie you will see. That Mr. Capra would take a Holiday movie, especially of that era, down this dark path is remarkable. The eventual epiphany followed by the happy ending is pure Holiday gold.

“It’s A Wonderful Life” is also a movie which has had an outsized influence. There are countless episodes of tv series which show the difference one character makes. It usually carries a title with a riff on the movie like sitcom “Married With Children’s” episode “It’s a Bundyful Life”.

By the time you read this I’ll have watched “It’s A Wonderful Life” for this year. It always reminds me, even when we think we are only a small piece of the universe, we are all important.

To those who only show up once-a-week to read these columns; Happy Holidays!