Earlier this week in the hive mind that is Facebook a friend put out the following question, “Could you recommend a not bloody horror movie to watch with her teenager?” Always happy to participate in these kinds of things I immediately typed out “The Sixth Sense”. That was when it got interesting as one of the other worker bees responded, “that isn’t horror that is suspense.” As soon as I saw it I knew I agreed which got me thinking about the difference. 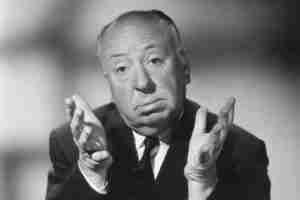 I began my thought experiment with Alfred Hitchcock who was dubbed the “Master of Suspense”. His movies were all about slowly bringing a viewer along with a plot where the threads slowly braid together, then continue to tighten until the strands break. One of the best examples of this type of suspense is in the 1954 film “Rear Window”. The main protagonist is confined to a wheelchair and spies on the neighboring building. Early on he thinks he sees a murder. The rest of the movie is the question of whether he saw what he saw and if he did is he in danger?

Much of what we consider suspense these days are new artists riffing on the playbook Mr. Hitchcock created. Despite the sobriquet lauding his skill at suspense he also made two of the all-time horror movies; “Psycho” and “The Birds”. The difference in both is the monster is evident with our heroes trying to find a way to survive.

Which is what makes “The Sixth Sense” suspense. The movie spends its running time revealing a secret. The pinnacle of modern suspense is director David Fincher’s “Se7en”. The movie chronicles two detectives tracking down a serial killer inspired by the Seven Deadly Sins. As each murder scene is discovered it brings the policemen ever closer to the killer until the movie reaches a chilling climax. “The Silence of the Lambs” is another movie where the monstrous villain is but a piece of the ever-tightening tension within the overall movie. Because both are seen from the perspective of law enforcement instead of the killer we are drawn in as an audience to want resolution while it seemingly stays out of reach.

Horror displays its wares out in the open from early on. From the moment the young girl Regan is possessed by the demon in “The Exorcist” the question is not where is the monster but how can we stop this? It applies equally as well to the slasher automatons like Michael Myers of “Halloween”, Jason of “Friday the 13th” or Freddy Krueger of “Nightmare on Elm Street”. One of my favorite scenes in this movie is after Michael Myers has been stabbed in “Halloween” the young child says, “Don’t you know you can’t kill the boogeyman?” Just as he rises up in the background. The audience screams and the final act is underway.

There are elements of both horror and suspense in many of the films mentioned but in the end they tend to reside mostly on one side of the horror/suspense divide more completely. It is the time of year to for fear to be in the air whether it is through suspense or horror it is part of what makes movies magical.

2 thoughts on “The Sunday Magazine: Is It Suspense or Horror?”