There is one passion of mine that I haven’t really written about in this column. I adore spicy food and hot chili peppers. For most of my life I have sought out the hottest most spicy sauces and peppers. In Colognoisseur HQ I take ghost peppers and infuse them into my olive oil. It adds a kick to everything I make using it. My favorite is it turns boring old popcorn into my kind of popcorn without having to sprinkle anything on it. There are shelves of bottles of hot sauce. I use sriracha instead of ketchup. All of this makes me sad to say I didn’t discover the YouTube show Hot Ones until eighteen months ago.

That happened as I had a clip from “The Tonight Show with Jimmy Fallon” where he and Priyanka Chopra Jonas sat across from Sean Evans as he had them eat increasingly spicy chicken wings. Their reactions were what you might expect as the wings got to the far end of the heat scale. This made me seek out Mr. Evans’ show. 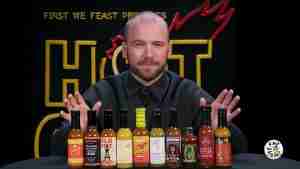 The premise is like the clip I found. Mr. Evans has a celebrity sit at a table with him as they eat increasingly spicier chicken wings. After each wing he asks a question, and they give a reply. The fun kicks in around wing 6 for most installments. It is there where the heat of the sauce moves into territories most people do not eat.

The difference in reactions run from DJ Khaled having a meltdown in season 1 to the recent season 15 appearance of singer Lorde who barely reacted. What you find in the middle is once the heat level rises the interview subjects have funny reactions to the queries.

Through it all Mr. Evans is a genial enabler convincing them to keep going past their tolerance levels until they reach what is called “The Last Dab”. An off the charts specially made sauce just for the show. There are now over 200 episodes and only a baker’s dozen has failed to make it all the way to the end. That is due in part to Mr. Evans. He is the overlooked secret ingredient in the show’s watchability. He is never mean. His staff finds some great interview questions which are not the typical celebrity Q&A’s. I am not sure if it would be as successful with any other host.

If you need to find a quick bite of video fun, start queuing up episodes of Hot Ones. You’ll keep going long after episode 10.