After unpacking the lights, ornaments, and trimming the next phase of getting into the holiday spirit is baking cookies. It usually means seasonal twists on things I already bake year around. Candy Cane kisses on thumbprint cookies or peppermint chips mixed in with the chocolate chips. The one cookie I only seem to make during the Holiday season probably has more to do with my odd sensibility because there isn’t anything particularly Christmas-like about snickerdoodles.

Snickerdoodles are the soft chewy version of a sugar cookie coated in cinnamon sugar prior to baking. I bake them this time of year and use green and red sugar in the place of regular sugar for the coating mixture. I got curious about their history and found out some interesting tidbits.

Snickerdoodles, by that name, are a purely North American creation. Although it is thought they are probably a variation on a German cookie called Schneckennudel, which translates to “snail noodle” the truth is probably more prosaic. They originated in New England and some baker liked the nonsense sound of the word. Because it seems like they first appeared in New England with the earliest mentions of them from that region. The earliest printed recipe is found from 1902 by a pair of Iowa housewives, Mrs. Barnum and Mrs. Delavan. The origin will probably never be fully uncovered. 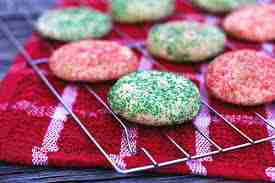 There is another kind of debate about snickerdoodles. Do you like them soft or crisp? That comes down to the way you bake them more than any change to the basic recipe. The other unique piece of making a snicker doodle is the ingredient “cream of tartar”. It is a more critical addition if you like them soft because cream of tartar helps make things fluffier by activating some of the other ingredients. It is not a dealbreaker if you don’t have it on hand but the ones with it in the recipe are chewier.

The recipe is as simple as it gets:

Mix the butter, shortening, sugar, brown sugar and eggs together with a beater until they form a smooth batter then add in the cream of tartar, baking soda, salt, and vanilla extract; beat until they are all mixed in. Then add in the flour a little at a time until it all forms a smooth mixture. Take a tablespoon out and roll into a ball. Then roll the ball through the coating mixture of 2 tablespoons of sugar and 2 teaspoons of ground cinnamon.

Put the balls evenly spaced on a cookie sheet and cook for 8 minutes at 400 degrees.

After they are done transfer to a wire rack to cool. This recipe usually makes thirty or so cookies.

As I mentioned above I use a holiday sugar mix of red and green colored sugar with the cinnamon to give them a holiday theme.