One of the great harbingers that the Holidays are upon us are the lights which go with them. Usually with the weekend after Thanksgiving in the US the first lights go up on homes and in cities. My fondness for Holiday lights came from a tradition as a kid growing up in the very warm South Florida. During the month of December, the large local bank had a tour of local homes with elaborate displays. In South Florida, these kinds of displays would tax the creativity of the homeowner. Depicting a wintry scene while the nighttime low was in the 70’s was not easy. One answer was to load up on the lights which was what many did. Those were always my favorites. Although the person who covered their lawn in cotton batting to simulate snow also has a soft spot in my heart. 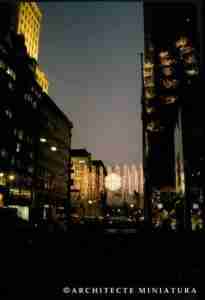 As my education and career drew me northward I would begin to experience Holiday lights in different ways. I remember my first NYC holiday season in 1984. There were two new holiday efforts that have endured to today but at the time had their share of detractors. One was the snowflake at 57th St and Fifth Avenue. It was designed by the man, Douglas Leigh, who did all the lighting schemes on the skyscrapers. Like those designs the controversy around the snowflake was from a distance as you walked towards it the illusion was gorgeous. Once you got underneath it all of the wires and lights seen up close lost the magic as if you were somehow seeing the trick. The other new feature in 1984 was putting floodlights on the façade of Rockefeller Center behind the Christmas tree. The complaint was it made 30 Rock look like The Rock as you expected a spotlight from a guard tower to wash over you. Both have evolved tremendously over the years. In 2002 the conceptual snowflake transformed into a giant crystalline snowflake and has become the centerpiece of the annual UNICEF Snowflake Ball. The stark flood lights at 30 Rock have become less so as they have been softened into an icy blue which complements the skating rink in front of it all. 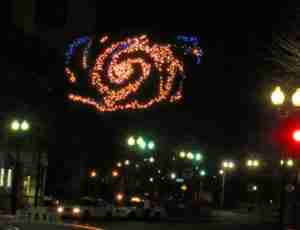 When I moved to Boston I also presided over the installation of a new set of Holiday lights in Harvard Square. The large set of lights look like a version of the Milky way galaxy to me. To others a swirl of windborne snow. To others it was a secularization of Christmas. Those who felt that way would be mollified the next year when a star joined the swirl a year later. I walked past this every Holiday season going to and fro from work. One early December blizzard it was the beacon in the night to draw me towards the path home. 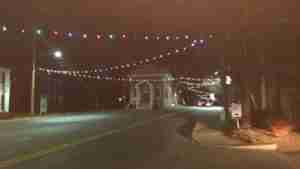 Poolesville, MD Lights in front of the Old Town Hall

When we moved to the Washington DC area we decided to live in a small town called Poolesville surrounded by farms. What is amusing to me is after loving these grand exhibitions of lights I have been around over the Holiday season; the ones here make me the happiest. In our sleepy little town with one main drag the Holiday lights crisscross above the road through much of the town. Each year they add a few more strings extending it further. Within a few years, they will cover the entire town. For now, what is here does the trick for me as the twinkle of many light bulbs has the ability to put me in the spirit of the Season.