I grew up with rock & roll. It existed from the moment I could recognize music on the radio until today. I listen to music every day. It is astonishing that there is over fifty years of music and styles for me to choose from now. I have always enjoyed finding out the history and background of the story behind the music. There isn’t a lot of it shown anymore but the recent four-part series on HBO called The Defiant Ones spanned the fifty years of popular music through the stories of two men; Jimmy Iovine and Dr. Dre. 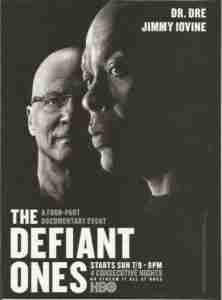 The series begins with their triumphant moment when they sell their Beats brand speakers and headphones to Apple for $3 billion in May of 2014. The deal was agreed to on a Friday with Apple asking the men to be quiet and allow them to make the announcement in the following week. Only to have Dre and Tyrese post a video, after partying, leaking the deal late Saturday night. The next 48-hours were both men worrying if it would cause Apple to renege. That they didn’t turn on each other shows the bond which had formed.

What struck me throughout the series were that both men were successes because they never stopped hustling. By the time they became partners there was nothing these two couldn’t achieve.

Mr. Iovine’s story is of working from cleaning up at the legendary Record Plant recording studio to finding a seat behind the mixing board. He works with some of the most influential musicians of the 1970’s. Throughout he never lost the drive to keep earning his seat in the studio. Dr. Dre started off as a DJ on the club scene in South Central LA constantly hustling until he uses the small studio behind one of the clubs to begin forming the sound that would become west coast hip-hop. Just like Mr. Iovine his drive would take him up the ladder always earning respect at each level because of his work ethic.

That’s just Part 1. The remaining episodes chronicle their rise before combining their talents when Mr. Iovine folded Death Row Records into his Interscope label along with Dr. Dre. Together the two men realized their shared vision of the music business could transform it. The remainder of the series tells that story through the roster of artists they championed.

If you are a fan of rock music The Defiant Ones is going to remind you of the DIY mentality that the best who operate in that world bring to it. The Defiant Ones proves if you never stop hustling there are no limits.