As I’ve written about in this column in our house, we watch a lot of Hallmark Channel Christmas movies. They are as much a part of our Season as anything else. Part of it there is a reliable formula. There is a protagonist who isn’t that much into Christmas. They end up in a new situation where they are surrounded by others who love the Holidays. Not so much a fish out of water plotline as a genial bah humbug plotline with less mean intent. Over the course of two hours our modern humbugger will find romance and the spirit of Christmas.

For many years, these movies lacked diversity they were entirely filled with white actors in the lead roles. There was a gradual awakening to that and over the last three or four years there have been other ethnicities represented. Who also have the identical issues that their predecessors had. It’s a formula because it works. Just plug in two star-crossed lovers one who doesn’t like Christmas and fill in the blanks. 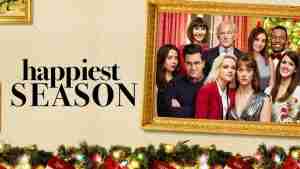 In the spirit of that diversity the streaming channel Hulu takes a shot at their own Hallmark-style Christmas movie featuring lesbian heroines. Called “Happiest Season” it is written by Clea DuVall and Mary Holland with Ms. DuVall directing. The basic setup of the story follows the formula. Abby played by Kristen Stewart is in love with Harper played by Mackenzie Davis. After a romantic pre-Christmas night in their Pittsburgh hometown Harper cajoles Abby into coming home with her. Abby lost her parents on Christmas and that is the association for which she chooses not to celebrate. When Harper convinces her to come with her Abby thinks it is also the time to propose to her. At this point this is the kind of Holiday formula I enjoy.  I expected a comedy of errors in getting the ring on Harper’s hand while Abby discovers Christmas through the effort. That is not what Ms. DuVall and Holland have in mind. The roadblock to happiness is more serious and real this time.

On the car ride home Harper tells Abby she is still closeted to her family. The reason she gives is her father is a local politician and it would cause a problem. She asks Abby to introduce herself as her orphaned roommate when they arrive. The movie then unravels this plot with much more seriousness than the typical Christmas movie.

There are times when Harper’s desire to remain closeted verges on being too mean to Abby. I grimaced a bit at a couple of the scenes. The wonderful Dan Levy as Abby and Harper’s friend John arrives just in time to take some of the sting out of those actions. The other character Riley, as portrayed by Aubrey Plaza also helps find the right tone to help Abby understand what Harper is going through. There was a part of me that wanted a movie where Riley and Abby ended up together. This is a Hallmark-style movie and after a disastrous Christmas Eve of revelations they all manage to find the requisite happy ending.

Happiest Season is a bit too serious to fit easily into the Hallmark-style Christmas movie genre. Which is okay because it never hurts to add a little bite to the egg nog.