There is a trend in television sitcoms I have never enjoyed. I call it the “celebration of assholes” genre. The greatest example of it is “Seinfeld”. They were even a specific breed of asshole, sphincterus nyc. I always found their actions pathetic instead of funny. I usually watch an episode or two of any of these and realize it is not my thing. Much to my surprise “Hacks” got past my antipathy to this type of comedy. 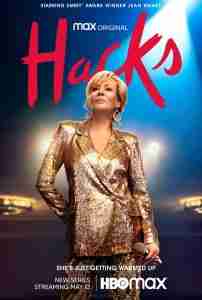 Hacks is a story of two women in comedy. One is an aging stand-up comedian, Deborah Vance played by Jean Smart. The other is a young comedy writer, Ava Daniels played by Hannah Einbinder. When we meet them. Deborah Vance is planning her 2,500th show in the same Las Vegas casino. Just before, she is told that will be her last as they are replacing her with younger acts. Ava Daniels has become unable to be hired because she made a crude political social media post. Her agent tells her he can’t find her anything.

The creators, Lucia Aniello, Paul W. Downs, and Jen Statsky all came from the show Broad City. They unflinchingly explore the lives of both women. One part of that is showing they are their own worst enemies. They consistently engage in self-destructive behavior only because it makes them feel good, for a moment. If that were the single note of the show, I likely would have stopped watching it. The part which kept me engaged was both women are alone because of who they are. They both don’t like it. They both can’t help themselves in pushing people away. The beauty of this show is Deborah and Ava might be the only two people who can love the other. Whether that can happen for more than a few hours at a time kept me coming back.

Another thing I liked about Hacks is the peek behind the scenes of stand-up comedy. I have always enjoyed the glimpses shows have given to the work that goes into being a stand-up. Deborah’s story is in broad strokes modeled on Joan Rivers. As one of the first female stand-ups she has survived a lot to be standing for this milestone show. It is all she has, and she doesn’t know anything else. Ava exemplifies the smart joke writers who work with the people who deliver the jokes. She also is a classic millennial and she and Deborah have a generational friction which plays throughout.

As I’ve thought about it the thing which kept me watching is these assholes have the opportunity for redemption. They seem to know what they are while willing to try and change. I found that the writers of Hacks found plenty of laughs in that premise.