Everything has its Opening Day. Baseball’s is in April followed by football in September, hockey and basketball in October. September is the start of the Fine Arts calendar for many. It defines a new year differently than the calendar. Wine less obviously has an Opening Day but I consider the third Thursday in November Opening Day for each vintage of wine. That’s when the new vintage, by French law, of Beaujolais Nouveau is released.

Beaujolais Nouveau is a wine meant to be drunk immediately and that is unlike most wines which will get better with some age. The traditional Beaujolais gets better with a year or two of age in the bottle. Not so for Beaujolais Nouveau. The same Gamay grapes are used but they go from harvest to bottle in a matter of weeks. What this does is create a short fermentation making Nouveau one of the least alcoholic wines you can buy. It also keeps the grapes from having as much contact with the skins keeping the tannins down and forming a softer wine.

Beaujolais Nouveau has been looked at as a predictor of that particular vintage year’s prospects. While that stretches its value a bit since Beaujolais sits far to the east of Bordeaux. It does fit in between Burgundy and the Rhone Valley where it might have a little more relevance. The only real solid correlation is to that year’s vintage in Beaujolais.

When I started spending regular time in New York I remember them flying in the bottles of Beaujolais Nouveau on the Concorde from Paris. There would be big tasting parties. The practice of obtaining the bottles of Beaujolais Nouveau by plane became so popular that the French allowed the wine to be shipped early outside of the country it just couldn’t be sold until after 12:01AM local time on the third Thursday of the month. Which is why no matter where you live you can lift a glass on the day of release now; no supersonic transports necessary. 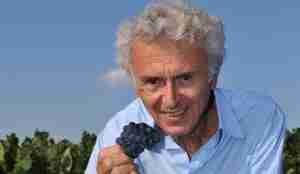 The producer responsible for this bit of hoopla is Georges Debouef who is one of the largest providers of Beaujolais wine. He started driving the bottles north to Paris on the opening day which would eventually spread to the rest of the world. What shouldn’t get lost under the showmanship is these are some of the best wines of the region. Every year a new label is produced to commemorate a new beginning. The wine inside is also pretty good. It is also a really great value as it can be found for less than $10 a bottle at most every wine store in the US.

The 2015 vintage has been touted as being one of the best in a while in Beaujolais and the 2015 version bears this out. As mentioned above these wines are always light in nature but the 2015 carries a bit more of everything characteristic about Beaujolais Nouveau. The grapes were riper and carrying more sugar so there is more alcohol content making it seem a little weightier. That added amount of sugar also enhances the fruity qualities so the cherry and raspberry facets are more pronounced than in recent years.

Beaujolais Nouveau due to its timing has been matched with the American holiday of Thanksgiving which happens on the fourth Thursday of November every year. While timing has something to do with it Beaujolais Nouveau is probably one of the most perfect wines to go with the traditional Thanksgiving meal of turkey, cranberry, and stuffing. Any wine carrying a more distinct body would overwhelm the blander flavors. Beaujolais Nouveau fits right in. It is an excellent companion to any poultry or light seafood preparation. Really anything where the food flavors are delicate and the wine needs to be as well.

I am writing this a week after the terrorist shootings in Paris of November 2015. It occurs to me that there is little more life affirming, in response to that tragedy, than lifting a glass of 2015 Beaujolais Nouveau. Continuing to live a life filled with wine, friends, and family is what it is all about.