What has always made me a sports fan is the unscripted drama inherent in the best moments. When the USA hockey team upset the USSR at the 1980 Lake Placid Winter Olympics it was one of the greatest underdog stories. A bunch of unsung pluggers from the US beat the hockey behemoth that was the USSR. When these kind of Cinderella stories are written they are almost always during short championship tournaments. Over the course of a limited period of time the biggest favorite can be cut down. It is what makes a believer of every fan at the beginning of the season. While it hasn’t come to an end one of the most remarkable underdog stories in all of sports is taking place in the English Premier League.

With five matches to go the Leicester City Foxes are leading the table. What it remarkable about this is one year ago they were at the opposite end of the table fighting for their lives. In European soccer if you finish in the bottom three you are relegated to the league below. It is a loss in every way of prestige and money. Teams are desperate to stay up. One year ago Leicester City was winning seven of their last nine matches to just stay in the league. Today they are three wins away from winning the league. This is a monumental Cinderella story the likes of which has never been seen in any sport. 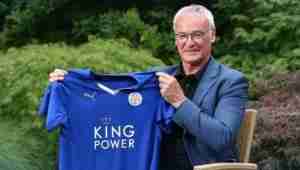 After escaping relegation, the team dismissed their current coach hiring Claudio Ranieri about a month prior to season’s start. That handicapped him in strengthening the squad as he had only six weeks to bring in any new players. Instead he kept faith with what was there. When the season kicked off in August Leicester City were 5000-1 odds to win the title. The league season is 38 matches long from mid-August through mid-May. It is a nine-month war of attrition as injuries and bad luck will take their toll over that time. Except in the case of Leicester City it hasn’t. Through 33 matches they have only lost 3 times; winning 21 and drawing 9. This is in a league which has five of the biggest soccer clubs in the world with huge cash reserves and depth in players to allow them to weather the injuries and bad luck. Teams like Leicester City are not supposed to be here, not with five matches to go.

Yet here they are. This is the greatest sporting Cinderella story ever because it has gone on for nearly nine months. This is not a team playing over their head for a few weeks this is a team outperforming expectations over months. It is a glorious sporting story which is putting to the sword how much money matters. It is a story of a team which plays for each other never showing any jitters because they know they earned this.

If you love sports, you need to tune into the final act of this over the next month. The success of Leicester City will make you believe that it is because anything is possible is one of the reasons why you love watching.