There are movies I watch over and over because I feel better when they are over. In these days of quarantine I’ve been visiting some of my favorites for a necessary dose of happiness. I watched the 1986 movie “Ferris Bueller’s Day Off” earlier this week. It is an ideal pick-me-up if you’re feeling the walls starting to close in on you. 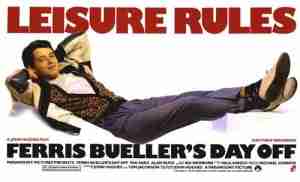 Writer-director John Hughes was on a roll during 1984-1986. He was the man who was bringing the life of the American teenager to film. His movies were all comedic with clever truths about growing up hidden amongst the laughs. Ferris Bueller’s Day Off was the next to last of these films. It also captured the joy of a perfect day skipping school.

The story is simple Ferris Bueller is the most popular kid in school. He knows that his time with his best friend Cameron is coming to an end. He wants to take his very uptight friend on one last joy ride of a day. The movie is the realization of that plan. It is the kind of last day we all would like to have with our high school friends before we graduate.

Mr. Hughes cast Matthew Broderick as Ferris. I am not sure there are too many actors that can tread the line of charming con man with a plan without becoming icky. Mr. Broderick navigates it brilliantly. As an audience you root for every scheme to work. The other thing Mr. Hughes does is to have Ferris speak directly to the audience, called breaking the fourth wall. At times throughout the movie he looks at the screen and tells us what is going on. That is one of the secrets to the charm of the performance. It co-opts the audience into being a member of the crew. If you know what’s happening, you are part of the day off.

The movie moves through one set piece after the other. All of them iconic in one way or another. They can be described in a couple words. “Danke Schoen” “Sausage King” “Ferrari”. I can just watch any scene from the movie and instantly lift my spirits.

If you need a break from the world for a couple hours let me prescribe “Ferris Bueller’s Day Off”. I think it is almost impossible not to have a smile on your face by the end.