My Holiday playlist is a mix of traditional standards and songs which look at the Season with a different perspective. As much as I like a Christmas song which brings a tear to my eye; I am just as happy with one which brings a sneer to my lip. When it rotates around the song “Father Christmas” by The Kinks is one which does this for me.

The Kinks were one of the original British Invasion bands of the mid-1960’s. It is likely they would have risen to the heights of some of the other UK bands except they were so rowdy during their shows the American union which oversaw musicians hit them with a four-year touring ban. This effectively closed them off from one of the biggest markets from 1965-1969. It is one reason when many UK bands cited them as an influence many Americans were surprised. The Kinks evolved over the years but they always had a bit of the proto-Punk in their music. The Who and The Rolling Stones were the only other bands of the era to capture the sense of anarchy which would be tapped into in the second half of the 1970’s. 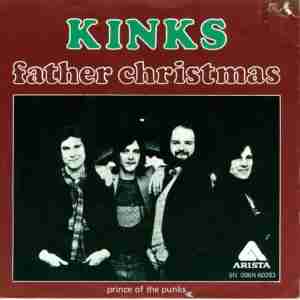 It was during that time that the new bands kept covering The Kinks early songs which in turn drove interest in the band anew. This newfound popularity convinced the band they should release a Christmas tune. In true The Kinks fashion it was not sugar plum fairies and candy canes.

Father Christmas was written by band co-founder Ray Davies. It tells the story of a department store Santa who is surrounded by a group of street kids who want money instead of toys. In five lines the chorus captures the mood as this is what the kids sing to the Santa:

Father Christmas, give us some money
We got no time for your silly toys
We'll beat you up if you don't hand it over
We want your bread so don't make us annoyed
Give all the toys to the little rich boys

That’s the part I curl my lip on when I’m singing along.

The arrangement is also fitting as it starts off with jingly happy piano before the guitars crash into everything. That happy piano returns near the end as the chorus provides a contrasting lyric to go along with it.

The Punk Rock movement in the UK arose out of the economic issues surrounding the younger generation at the time. While The Kinks were riding a nice wave of success in 1977 Father Christmas felt like it was a song which could have come from the streets. In the video above, despite the poor quality you get an idea of The Kinks at their anti-Establishment best.

Father Christmas almost acts as a palate cleanser when it shuffles to the top as it often can be sandwiched between Dean Martin and Bing Crosby. Even during the Holidays I need a few minutes when my inner Punk Santa can be allowed to sneer at things until the next song.